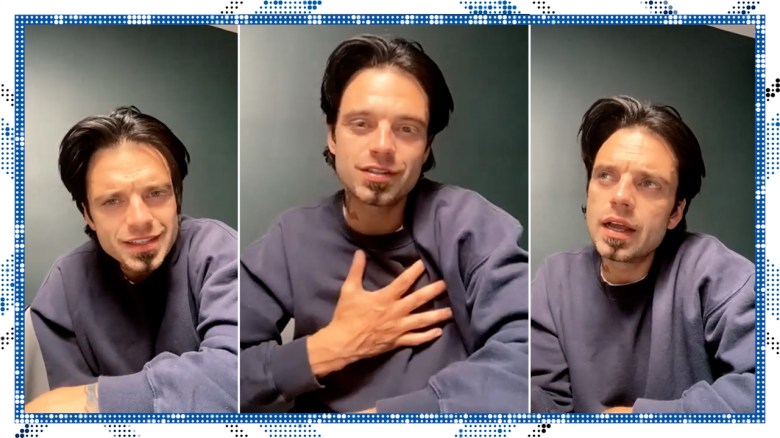 It’s been nearly 10 years since Sebastian Stan made his debut in the Marvel Cinematic Universe. In “Captain America: The First Avenger,” the actor embodied (Captain) America’s Best Friend Bucky Barnes, a Brooklyn boy who spent his life looking after his buddy Steve Rogers (Chris Evans). But in his next appearance, Bucky is a shadow of himself, having been captured by Nazis during World War II and turned into a weapon of mass destruction with the moniker “The Winter Soldier.”

And that was just the beginning.

The most recent chapter of the Bucky Barnes saga took place in a new frontier, as the MCU shifted to TV on a series titled “The Falcon and The Winter Soldier,” where he worked side by side with Sam Wilson (Anthony Mackie), a.k.a. Falcon.

For his part, when first drafted into the Marvel movie business, Stan had no idea he’d still be around 10 years later, still exploring Bucky’s history, and now, future. To him, it was just a path he just kept traveling down, but was very happy to be included and for the opportunity to continue exploring a character that only grew more complicated.

Indeed, the beauty for many Marvel fans when watching “Winter Soldier” was the chance to see Bucky get some time to delve into the trauma he’s been carrying for decades upon decades. (He is 106 years old, after all.) That included finally being freed from the code words that had been implanted in the character’s brain by HYDRA to control him so many years ago, as depicted in an intensely emotional scene at the beginning of Episode 4.

“It was one of those things where you read the scripts and it’s a scene that you feel grateful about as an actor,” Stan said during a recent interview with IndieWire. “You’re like, ‘Oh, cool, I’m gonna get to do this.’ And then you’re really terrified about it. Because you’re like, ‘Oh, my God, I have the scene.’ I had it marked on my calendar and then I was counting the days. ‘Six days to the scene.'”

Sebastian Stan in “The Falcon and the Winter Soldier”

That scene is a flashback to Bucky’s time spent in Wakanda, where he is taken to recover from the events in “Captain America: Civil War.” Ayo, the second-in-command of Wakanda’s security force, the Dora Milaje takes Bucky through a deprogramming ritual, seated by a raging fire. Stan speaks little but his face says everything.

“From from a point of view of the character, it was really nice to have that scene. We’ve never really seen [Bucky] let go, so to speak,” Stan said. “I keep telling Kevin [Feige] about it. He’s a big part of Wakanda. That’s where his journey started again and it was just nice to have that scene and have it happen there and for us to have that flashback to give us context to everything else that he was doing.”

It’s maybe a curious conversation to expect from a billion-dollar franchise, but much of the first Disney+ TV efforts from Marvel have at least tangentially explored themes of trauma. It might not have been where Stan expected the storytelling to go, but it’s a topic he’s grateful to discuss either way.

“I have a lot of fans that reach out, writing about trauma and telling me about certain situations that they’re going through and feeling empowered,” he said. “I feel like that might be the greatest gift, to be honest. People are experiencing a lot of difficult things. And if for a second, they can just have another experience outside of themselves, I think we’ve done our job. That’s the most important thing, right?”

And there’s a reason that those stories work so well within the Marvel worlds. For as many of the Avengers that are gods (Thor) or received alien-provided awesomeness (Captain Marvel) or are radiated hulks (Hulk), just as many are regular folks, sucked into situations in which technology, physical aptitude, and their wits are the only ways they’re able to survive. It takes a toll.

Sebastian Stan, Anthony Mackie, and Adepero Oduye in “The Falcon and the Winter Soldier”

“One of the things I loved about our show, if I may be biased, Sam Wilson and Bucky Barnes aren’t actually superheroes. They’re regular people are trying to navigate real life stuff. And ‘WandaVision’ did this too. I love that,” Stan said. “The MCU was dealing with situations, trying to highlight that even though these people have superpowers, they’re still traumatized by these issues.”

“It’s what Marvel is so great at,” he said. “This is entertainment, but at the same time, there’s a message there. There’s something deeper about it, that’s reflected in its popularity. If it was just entertainment, people can’t rewatch that over and over. I don’t think we have the patience or the attention span for that. People want to relate. People want to feel.”

This Article is related to: Awards Spotlight Spring 2021 and tagged MCU, Sebastian Stan, The Falcon and the Winter Soldier