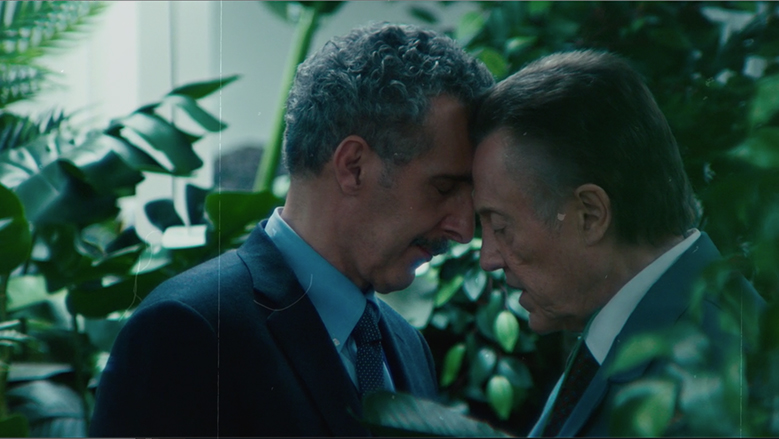 Amid all the corporate shop talk, artistic appraisals, and expressed feelings, the endearing office romance shared in the first season of “Severance” by Lumon coworkers Irving (John Turturro) and Burt (Christopher Walken) can be boiled down to a few simple gestures — literal gestures, physical gestures, made by each participants’ delicate, determined, and descriptive hands.

Early on, when Irving goes to visit Burt in the Optics and Design department, their hands rest on the edge of a painting. Burt, the more confidant of the two, makes the first move, reaching a few inches over and placing his hand over Irving’s. That’s enough to spook the punctilious company man… until, days later, Irving reciprocates in the same room, looking over a different painting, as he stretches his right pinkie over Burt’s welcoming knuckle. They’re interrupted again, this time by a crusading coworker, but soon find a private space in an unnamed room inexplicably filled with plants. Surrounded by this fence-like foliage, Burt offers to kiss Irving — a classic culmination for their office rendezvous — except it’s too soon for the nervous Macrodata Refiner. They lean on each other instead. “Just stay,” Burt says. “Stay here with me.”

If only they could. As severed employees, their time together is limited to work, and their physical romance closes not with a kiss, nor when their hands meet with any personal sentiment, but with the professional courtesy of a handshake. Burt is retiring. Irving has to say goodbye. Memories of their time in the plant room will have to suffice — at least, until Season 2.

“It was fun shooting that scene,” Christopher Walken said, “with all those trees and bushes. It was a little like ‘Tarzan.’”

“So I guess I would be Jane,” John Turturro said, eliciting shared laughter from the tight-knit co-stars.

If anyone is searching for the secret to the duo’s palpable chemistry in “Severance,” there it is: Walken and Turturro are old friends, with the former starring in many of the latter’s directorial efforts and both building up a genuine camaraderie over the past three decades. There’s no hidden trick to their connection in these roles, no grueling rehearsals or bonding exercises. Their movements were as instinctual as their characters’. They let the magic happen in the moment, playing the parts and relying on their shared affection to provide that extra zip — a “sparkle” evident from their very first scene.

“There was this, what’s the word, frisson between us,” Walken said. “Even though in the show they’re meeting for the first time, you can sense a little sparkle between them.”

“When you know each other a little bit, you know how each other works and [how we] bounce off each other, then you don’t have to act as much,” Turturro said.

While clearly a modest statement, given the level of precision, care, and love given to each role, both award-winning actors insist there’s truth to it, too.

“That stuff you bring with you from all the years you’ve known each other [matters],” Walken said. “Having socialized together — I know his family, and we talk about food a lot, John and I. We don’t talk too much about the show.”

“Right, we kind of just let it happen,” Turturro said. “You either have chemistry with someone or you don’t. I think when you have that, you can really build and play.”

Still, the zeal within Irving and Burt’s relationship and surrounding its depiction in “Severance” is a testament to Turturro and Walken’s talents. There are a number of romances (and potential romances) in Dan Erickson’s hit Apple TV+ drama — Devon (Jen Tullock) and Ricken (Michael Churnus), Mark (Adam Scott) and his Outtie’s dates with Alexa (Nikki M. James), Mark and his Innie’s burgeoning feelings for Helly (Britt Lower), Mark and his… historic relationship with his wife — but none have been met with calls to “protect [this couple] at all costs” the way Burt and Irving have.

Credit goes to Erickson and his writing staff, along with director and executive producer Ben Stiller — after all, stories of forbidden love stir powerful reactions when crafted well — but recognition also must be given to the actors and how they shaped their roles individually and together.

Turturro’s by-the-book businessman is instantly recognizable. The actor embodies Irving’s inner conflict with his wide-eyed reactions to unexpected news. He crafts a precise, elevated manner of speaking that makes his exasperated deviations later on all the more powerful. He’s a buttoned-up suit who’s loyal to Lumon, but his passion for his job, for its purpose, and for Burt pours out of his being.

Walken is as playful as we’ve seen him in years. Burt often reacts to extreme outbursts with a smile, a laugh, or curious silence. But his earnest feelings for Irving are never in doubt. Walken is dialed in when it comes to his character’s chief interest, and audiences need look no further than the joke he tells Irving in Episode 5.

After being locked in a conference room, suspected of treachery by Dillon (Zach Cherry), Burt has to prove his pure intentions by telling the joke he claimed to be rehearsing when they found him there. Burt is hesitant in introducing the idea, as if he knows how foolishly he’s behaving, but it disappears in his delivery. Walken pushes through the awkwardness, knowing he has to be charming and bashful not just to convince the skeptical Dillon, but to win over Irving, too. By paying Irving an unexpected compliment with the punchline — “that solves the mystery of your youthful energy” — he earns a hearty laugh from his target and the audience at once.

It’s a masterful moment, both endearing and layered, sold by a veteran who knows how to work through a monologue.

“Sometimes Chris would make me laugh and you can ruin a take that way,” Turturro said. “But I always think if you’re laughing and having a good time, that means at least you’re open. You’re not trying to control the scene in any way, and you can discover good things that way.”

I think Burt and Irving would agree.

For more on “Severance” with Christopher Walken and John Turturro, watch the video above.