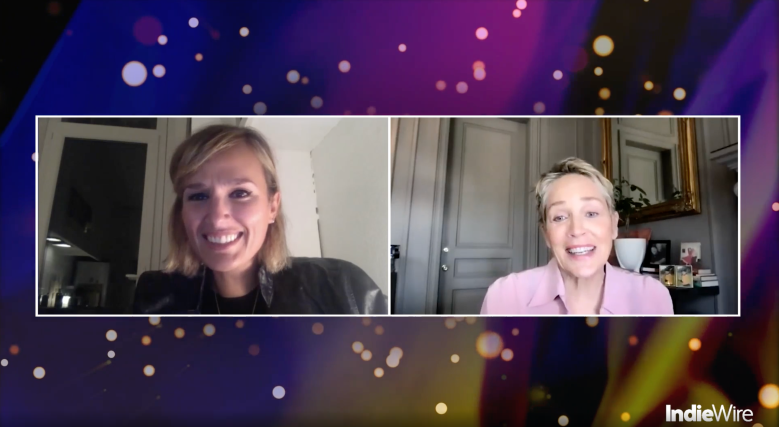 Back in July 2021, Julia Ducournau made history as only the second female director in all of the Cannes Film Festival to win its top prize, the Palme d’Or, for “Titane.” That very honor was presented to her onstage by iconic actress Sharon Stone. Now, nearly half a year later, IndieWire’s Eric Kohn has reconvened Ducournau and Stone (who finally had the chance to see the movie) for an exclusive, one-on-one interview pairing the actress and filmmaker for a wide-ranging discussion about the bracing body-horror movie, which is now France’s submission for the 2022 Best International Feature Academy Award. Watch the full conversation in the video above.

“I was one of the biggest box office female stars in my generation, and for that generation, it meant I made more box office money than anybody,” Stone said as part of her introduction. But, she added, “I could not get the studio to give me a budget to direct, not even the smallest budget, and when I asked them to do that, they laughed at me, and they continued to laugh at me for forever. The way that they treated me was dismissive, was so harsh, as if I was a joke, and I came with not only storyboards but shot-by-shot breakdowns of scripts, with the music and with people telling me it was the best presentations they’d ever heard.”

For that reason, Stone said she was in awe of Ducournau’s win in terms of how far female directors have come since she tried to get scripts off the ground behind the camera in the ’90s.

“For me to have the opportunity to present a young woman with the Palme d’Or for an avant-garde film about a woman was an extraordinary experience for me… to see that the world was changing. That women were changing. That these wonderful women before us like Agnès Varda, that all these other women that had tried so far and done so much, [with] Thelma Schoonmaker being an editor — these women who had done things in the film world had made it possible for you to direct. For you to make a film. For you to win. It was so thrilling for me, it was such a moment. It was literally like seeing a baby being birthed on the stage. It was like standing there holding history in my hands.”

Stone added, “Thank you for capturing female rage and anguish… on film. Thank you.”

“It moves me a lot that you can relate to that rage. That was the point. I know that there were people out there that I was talking to,” Ducournau said. She dived deeper into the film’s protagonist, Alexia (Agathe Rousselle), a dancer who is also a serial killer — and takes actions that often alienate the audience.

“I chose to create a character that was hyper-violent, was going against every feminist stereotype of softness, being polite, having a great body, all that shit. I think organically, I needed to get it out, that rage. And I think that was definitely my only way to relate to that character at the beginning. I don’t need to morally sustain what she’s doing. I just need to feel what she feels, and this is something that I feel,” Ducournau said. “I knew she was going to kill a lot in my life.”

This Article is related to: Awards and tagged Consider This International, Consider This Panels, Julia Ducournau, Sharon Stone, Titane