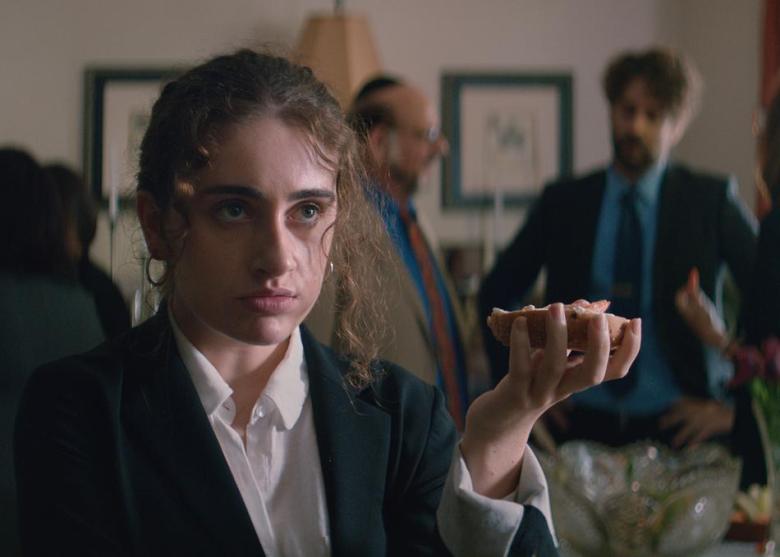 Consider This: Conversations highlight film’s award-worthy productions through panel discussions with the artists themselves. The above video is presented by Utopia Movies and hosted by IndieWire’s Eric Kohn. “Shiva Baby” is streaming now via HBO Max, Kanopy, and DirecTV, and available for purchase at many other sites.

In crafting the hilarious tension that plays out over the course of a claustrophobic post-funeral gathering in “Shiva Baby,” both writer-director Emma Seligman and star Rachel Sennott started with what they know. During the namesake Shiva, disparate worlds inhabited by Sennott’s Danielle collide to anxiety-provoking results, offering a shared venue for her sugar daddy (with wife and baby in tow), parents, and ex-girlfriend.

For recent New York University graduate Seligman, writing something adjacent to her own experiences as a queer Jewish woman helped her approach the project with confidence, she said.

“I chose to set it at a Jewish family event and I think that made it a lot easier. I was collecting notes and lines people had said for years. I chose to have the main character be a sugar baby because there were so many at NYU and so many of my friends and Rachel’s friends did it,” she said. “I wanted to tell a story about a young woman having to confront different versions of herself, because approaching graduation I felt all those pressures put on young people in general, but especially young woman.

“Often your family life and sex life don’t interact in such a … public, physical way in front of you. I wanted to see what would happen to a young woman if she had to balance those two things in the same room.”

Sennott said that though she’s not Jewish, her own family dynamics, along with her own romantic relationships, helped inform her approach to playing Danielle. Sennott played the character in Seligman’s 2018 thesis-film short that served as the basis of the feature. But the short didn’t lean as heavily into the psychodrama of the full-length “Shiva Baby.”

With personal experiences as a starting point, Seligman worked closely with Sennott and her crew to shoot the film in 16 days. With a goal of truly centering the movie around Danielle’s experiences as part of a tonal shift from short to feature, the director and actor went through the script line by line and dug in to what wasn’t on the page, including the “intrusive thoughts” the character was having.

“What is her anxiety level? Who has the power? What is she thinking?,” Sennott said. “We talked about ‘What is the worst possible thing that could happen right now, at any given moment’ … just knowing what was going on in her mind in each scene was really helpful. Emma would help ground me in that, and be like ‘You’re looking at the baby. You’re finally seeing his wife, she’s the most beautiful woman you’ve ever seen.'”

Seligman said she also spent a great deal of time planning out the details of the film’s crowded gathering, all while dealing with budget constraints and other challenges.

“The choreography and blocking was the element we spent the most time on, the most amount of people were contributing to,” she said. “Once we chose the house, I mapped this really not-to-scale floor-plan with LEGO characters and my DP and I created a shot list off of that. We presented that to our producers and our AD once we were in the house, then it became a lot more collaborative. We didn’t have to sacrifice a lot, but we had to figure out how to angle certain things so we weren’t seeing into that room because we couldn’t afford extras on that day.

“We only had two days with all six principal actors, so it was a lot of splitting up scenes, shooting one part of the scene one week and another part, or worst-case scenario sometimes Rachel would have to act to a PA or our AD and wouldn’t be facing the actual actors that’s in the scene with her.”