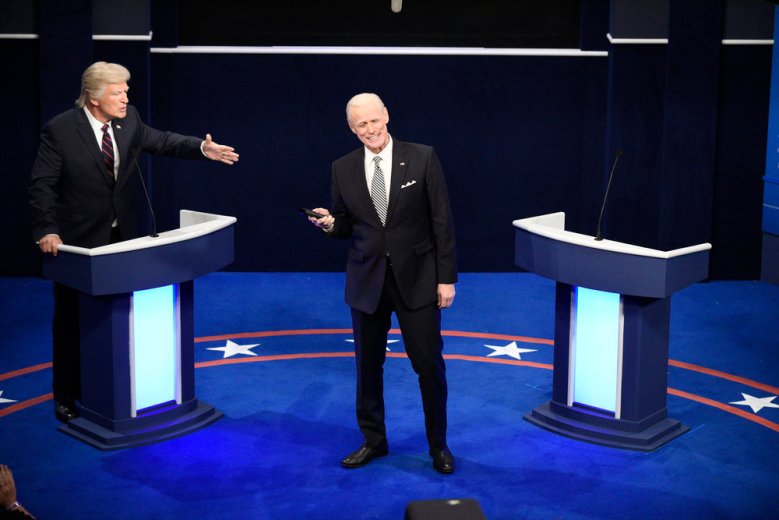 “Saturday Night Live” returned over the weekend for Season 46 with the odds stacked against it and the countdown to Election Day a mere month away. The perpetually frantic news cycle that has developed under the Trump Administration reached furious new heights (lows?) last week with a one-two-three punch that began with revelations about the president’s tax history, escalated with a disastrous presidential debate, and ended (for the moment) with a grand denouement in the form of a COVID-19 outbreak in the White House resulting in Trump’s hospitalization.

And how did the sketch comedy series fare crafting parody of a week already rife with ridiculous political developments, all while adhering to pandemic safety measures?

Unsurprisingly, the episode’s cold open centered around the debate between Donald Trump and Joe Biden, featuring the return of Alec Baldwin’s exhausting lampoon of the president and introducing the much ballyhooed debut of Jim Carrey as Biden.

Let’s be clear: Attempting to parody something as surreal as last week’s debate was always going to be a herculean feat. But “SNL” didn’t come out and swing for the fences — the only way to win against impossible odds — they opted to bunt. And they whiffed.

Baldwin and Carrey had no comedic chemistry, something surely hampered by social distancing but primarily because of a complete lack of characterization. Biden is nearly impossible to impersonate because he’s not particularly memorable. He was the safest, most white bread of all the Democratic candidates. That’s why he’s the nominee. The “SNL” strategy for depicting him remains largely unknown because I’m not entirely certain they had an angle they were going for anyway.

As for Baldwin, his squinting, pouting characterization of the president didn’t work because a) it hasn’t since roughly 2016, and b) his behavior was nowhere near as outrageous as that of the Leader of the Free World during the debate.

Beyond that, the jokes offered up during the sketch were obvious and almost offensively mundane. There’s no cutting political discourse or insight into how the country arrived at a place where the only sensible way to get the president to abide by common courtesy is to cut off his microphone. Instead, they leaned on Carrey attempting to ape Biden’s signature smile and landing somewhere between “Mask” and “The Mask” and trotting out poor Maya Rudolph (as Kamala Harris) to play mom to two grown-ass men.

But maybe all of that could be forgiven but for one unforgivable act: The cold open was more than 13-and-a-half minutes long. Do you know how long that is? It’s nearly one-sixth the running time of the actual debate. That’s longer than the album version of Meatloaf’s “I’d Do Anything For Love (But I Won’t Do That)” and that song is so, so long.

It was too long for the sketch to gain or maintain momentum. It was too long for jokes that didn’t land in their first iteration to be further beaten into the ground. It was far too long for an exercise that was largely a recap of an event already viewed in real-time by 73 million people.

For more on what we want from “Saturday Night Live” and comedy in general, check out this week’s episode of IndieWire’s TV podcast “Millions of Screens” as hosts Deputy TV Editor Ben Travers, Creative Producer Leo Garcia, and TV Awards Editor Libby Hill, go deep on what it means for comedians to speak truth to power and how to stick it to the man when, well, you are the man.

Plus, stay tuned as Travers regales us with tales from what sounds like an absolutely mind-boggling, 12-hour, live episode of HBO’s “The Third Day,” as well as his safety concerns for star Jude Law. And the team pours one out for poor “GLOW,” which saw its fourth and final season retroactively cancelled by Netflix over COVID-19 concerns, an excuse growing increasingly prevalent. In keeping with ongoing social distancing mandates, this week’s episode was again recorded from the comfort of everyone’s respective Los Angeles-area apartments, and we’re again offering viewers a video version of the podcast, as embedded above.