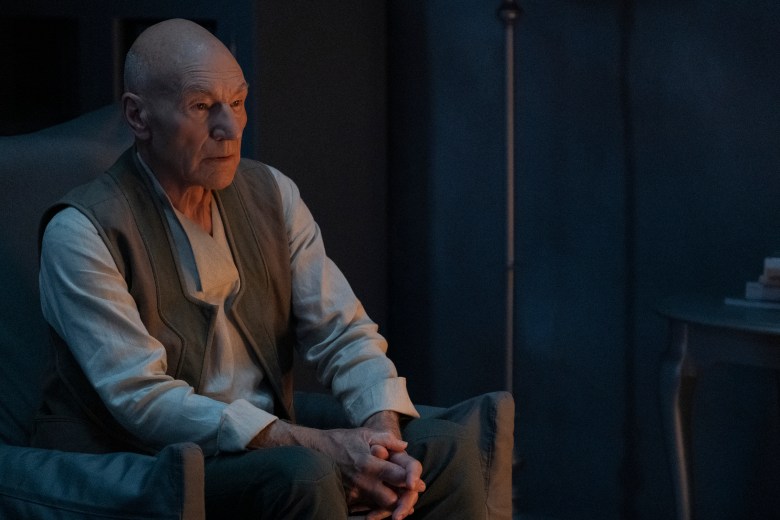 If there’s one thing Jean-Luc Picard knows how to do, it’s give a rousing monologue. And Patrick Stewart’s delivery is never anything less than inspiring. This time, Picard needs to inspire himself as much as he does the ragtag crew of misfits (Alison Pill, Santiago Cabrera, Michelle Hurd, and Evan Evagora) he’s assembled on the first season of “Star Trek: Picard”: they’re all caught between two warring factions on the planet Coppelius, home to a race of androids similar to the late Data.

On the one hand, there’s a fleet of 218 Romulan warbirds coming to wipe out the androids, and probably much of the rest of the planet. The pointy-eared villains believe that the “synths” are going to bring about a galactic apocalypse. And, well, they’re right. Because they feel threatened by the Romulans, the synths are going to request help from an even more advanced coalition of androids that spans galaxies. To ensure their survival, these higher-level androids may decide to preemptively destroy all organic life they encounter.

How’s that for a setup for the first season finale of “Picard”? The former Enterprise captain will have to screw his courage to the sticking place both to fend off the Romulans and prevent the androids from bringing about their apocalypse.

And in a moment of calm before the storm, Picard lays out these stakes and why fighting for what’s right is essential, in a speech to Pill’s Dr. Agnes Jurati. “Fear is an incompetent teacher,” Picard says — to himself as much as to Jurati. “Yes, they have life. But no one is teaching them what it is for. To be alive is a responsibility, as well as a right.”

The first season of “Star Trek: Picard” comprised 10 episodes, with its final two installments sharing the title “Et in Arcadia Ego,” the name of a 1637-38 painting by French Baroque master Nicolas Poussin. (IndieWire’s recap of “Et in Arcadia Ego Part 1” analyzed the significance of that painting and also the name of the planet Coppelius.) The series has already been renewed for a second season.

Check out a brand new clip from “Star Trek: Picard,” exclusively on IndieWire, above.

“Star Trek: Picard” will air its Season 1 finale on CBS All Access March 26.