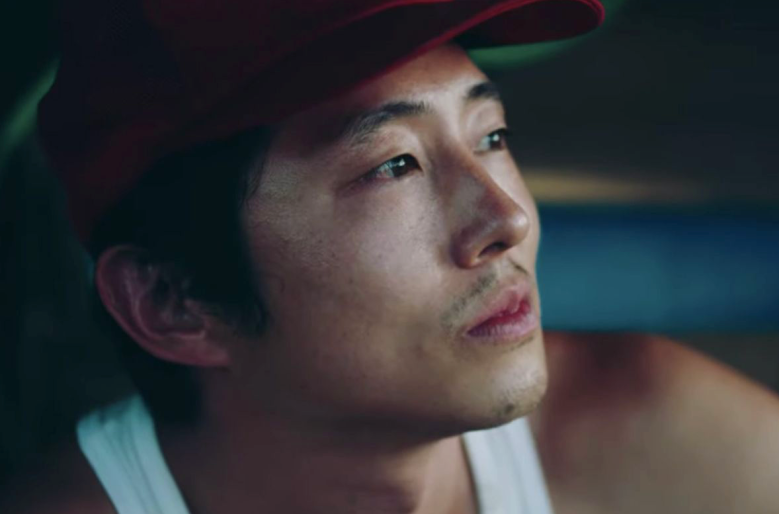 It’s been a long year since January 2020, when Lee Isaac Chung’s “Minari” scored both the Dramatic Grand Jury and Audience awards at Sundance. A24 was considering a summer rollout for the heartland Arkansas family drama, but COVID intervened, and the movie’s star Steven Yeun found himself captive at home in Los Angeles with his wife and two little kids, doing Zoom interviews. He worried that the film would somehow get lost, he admitted in our conversation (above). But finally A24 got the movie widely seen, and it’s been showing up in many of the key awards nominations that lead to Oscars, and, riding the controversy about arcane Golden Globes rules, won their foreign-language award when it wasn’t eligible for Best Motion Picture – Drama.

“I get the anger, I get the response to this, institutions and rules fail us all the time,” Yeun said. “They are never able to capture the complexities of real life… Truth is, the feeling emanating for a film about the Asian American experience often carries with it an unAmericanness, or an outside perspective, and is never encapsulated as part of Americana. And so whether the rule is sound or not, that’s the feeling that’s coming from it. I’m proud to be part of a project that shot an arrow directly at the bullseye of what this feeling is. It’s challenging the institutions that often fail us.”

Both Yeun and his costar, Korean movie star Yuh-jung Youn, wound up with SAG, Critics Choice, and Indie Spirit nominations, as well as being part of the coveted SAG Ensemble nomination that helped to propel “Parasite” to its Oscar win last year.

The actor has a lot to be grateful for, landing the role of Glenn Rhee on the AMC zombie-fest “Walking Dead” within five months of his arrival in L.A. “I simultaneously held and pushed away a feeling of knowing that I was one of the few Asian-American faces on TV and cinema at the time,” he said, even though the likes of John Cho, Daniel Dae Kim, and Sandra Oh had “navigated an even more difficult time than myself. I was being asked to occupy a space that was also fresh and new, in that the character wasn’t too stereotypical or needing to be defined by their ethnicity. Glenn was beyond that conversation. That was an incredible liberation for me, that’s the place we want to get to.”

There’s no question that the actor who put in seven years on the global juggernaut hit emerged a star with a hefty social media following. “Afterwards I realized I deeply gained a lot of knowledge,” he said, not just about acting under pressure, but “a massive privilege in not being a starving artist.” But Glenn also existed in a constant present, without a back story. After that, “I wanted to contextualize me,” Yeun said. “I wanted to understand how I might want to express myself in a deeper way…I don’t know where that confidence came from, it was more like after seven years immersed in a reality that wasn’t mine, I couldn’t tell the difference between where that ended and where it began.”

With “fuck you money” in hand, the actor had the luxury of being able to say, “been there, done that” and turn down countless offers to play such television roles as a CIA operative on the run who’s good at tech, or a scientist creating a robot friend, and escape the boxes to which he could have been consigned. Instead, he took far lower-paying roles, from Lee Chang-dong’s lauded art film “Burning” (Well Go), in which he played a layered, not-so-upstanding character and earned his first raves from film critics, to two comedic roles, on Boots Riley’s “Sorry to Bother You” (Focus Features) and Bong Joon Ho’s hybrid East-West comedy “Okja” (Netflix). “Bong Joon Ho served to contextualize me in a larger narrative,” Yeun said, “where someone like myself who looks like me could come from.”

That’s why, when Yeun’s agent Christina Chow, who also reps the actor’s wife’s cousin, Lee Isaac Chung, sent him the auteur’s script for “Minari,” Yeun not only wanted to play the leading role of a Korean immigrant trying to start his own farm in a strange new land, but signed on as executive producer, so that he could use his clout to help get the movie made. “It was so honest and so truthful and so confident in its own point of view, I really loved it,” said Yeun. “It was unwavering in its own self, it didn’t require a juxtaposition to anything else for its own existence.”

Yeun sent the script to one of the top producers in Hollywood, Plan B (“12 Years a Slave,” “Moonlight”), where production executive Christina Oh (“The Last Black Man in San Francisco”) backed the project, bringing in distributor A24. Many Asian American actors, Yeun said, “get mired too much in serving larger expectations of an audience, or a gaze, or piecing together an identity.”

During filming, Yeun appreciated the authority brought by Korean star Youn Yuh-jung as the grandmother, who is known as a tough-driving bad-ass. “I have the highest respect for her,” he said. “She’s very real, she tells it like it is… She’s brave that way. It wasn’t a fear for me.” Yeun leaned into the adversarial relationship between the father and the mother-in-law. “Jacob doesn’t want [her] there. She can really see him for what he is, and see through him, and for me the actor, Yuh-jung could see through me if I give a bad performance… I wanted her validation and wanted her to think I was doing a great job.”

While Yeun’s own father isn’t as brooding as Jacob, who doggedly drags his family along on his quest to make it in America, no matter the cost to them or himself, the actor did remember his father’s decision to leave his life as an architect in Seoul and move to the United States. “He made a decision to uproot his family to get land,”  said Yeun. “That’s such a bold move…As the son of my father I also resonated with that feeling, of wanting to make my own life, and wanting to find who I am and what my purpose is, and what I’m here to do, that existential, isolated loneliness that comes with that feeling, I love it. It’s terrible sometimes, but I am deeply attracted to it. That’s Jacob to me, that’s James Dean to me, so many people who have lived and thrived in the gaps. I like that.”

Next up:  Yeun has seen a cut of Stephen Karam’s film adaptation of his Broadway smash, the Thanksgiving family drama “The Humans” (A24), in which he costars with Richard Jenkins, June Squibb, Beanie Feldstein and Amy Schumer. “There’s nothing like this,” Yeun said. “He made something new. He’s an inspired special writer and playwright and even more incredibly, director. This was another one of those immersive experiences where you’re surrounded by other artists who were really down to game for this project. I wish we could just get this movie out there.”