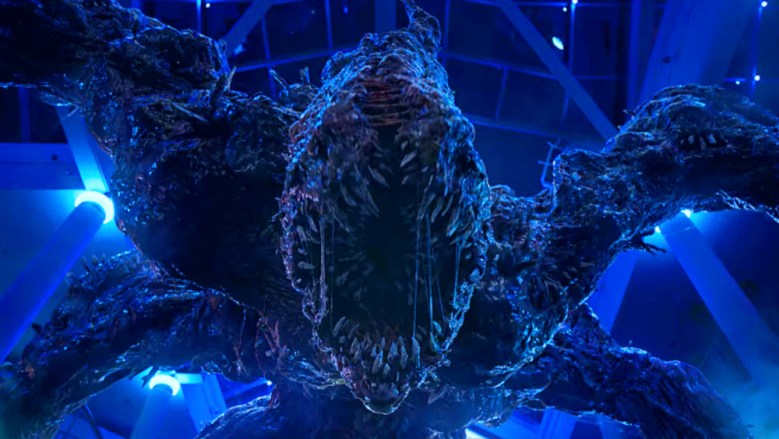 In the Season 3 finale (“Chapter Eight: The Battle of Starcourt”), the “Stranger Things” gang comes face to face with the Mind Flayer. Throughout the season, the audience watched the gory monster evolve — forming from a collective of rats in Episode 1 and then growing until it is the mall-crushing monster you can see in the clip above.

Craig Henighan is one of the best sound designers and re-recording mixers working in feature films, and has been the heart of translating the Duffer Brothers’ vision into sound since the beginning of “Stranger Things.” One of the continued draws for Henighan to the project is that the Duffers have enabled him to approach the popular Netflix series like he would a movie.

“We really tried to establish more of that film-oriented work flow, meaning a sound designer like myself would be involved early,” said Henighan. “I get the scripts and when the brothers are starting to get conceptual ideas together for what new monsters we’re going to have, or any sort of new sound-oriented element they want to work on, they just would send over clips or early JPEGs of artistic renders of potential ideas of what the monsters would look like.”

In the case of the Season 3 monster, however, the sound designer wasn’t sent any early rendering of the Mind Flayer’s final version (as it appears in the clip above), his creative starting point was also the monster’s. “As he grew, we just developed the sound around the size of how [much] bigger he needed to get,” said Henighan. “Early on it’s a lot of snarling and growling, which built into using bigger animals to get the ‘roar’ idea across.” Adding layer by layer, until in the season finale the sound of the Mind Flayer is dripping with gore, earth-shaking in size, and with a roar seemingly more powerful than any weapon the characters can throw at it.”

Before breaking down how Henighan accomplished this, it’s first helpful to watch the scene again, but with only the foley and sound effects tracks.

To capture the Mind Flayer’s sheer size and weight, Henighan made sure every footstep was a series of explosions, underlined by a really big bass drum hitting. “The heavier, deep impact stuff I used explosions, punches, big giant foot stomps, all those kinds of classic things you do for monsters.”

From a technical standpoint he used “a good deal of compression and limiting on those sounds to make them feel big and thick,” Henighan explained. “We have to be cognizant of how these shows are aired. We can’t always depend on the subwoofer to give you that impact. So the job is to find sounds out there for when he’s walking around that have thickness and weight to them, but also play in the frequency spectrum that televisions, soundbars, and 5.1 systems at home can handle. You don’t want to lose all that.”

Henighan said one of the keys to starting on the show early is every season has a theme and subsequent sound vibe, and for Season 3 he clued in early that his sound design would be rooted in gore. The ultimate expression of this is the slimy, gooey Mind Flayer. “Every single footstep was sort of two-fold, you had the heavy hits and the strong impact coupled with footsteps in mud and slime and slop to give it that extra gore, which obviously ties into when its tentacles come out.”

To get just the right muddy footstep, Henighan took advantage of a particularly wet rainy season in Los Angeles. Exiting his home studio, he put on an old pair of rubber boots and recorded himself walking in his backyard. “I used a couple of different high quality microphones that capture really good frequency ranges and I recorded at a high frequency range. What that allows you to do is you can pitch stuff down and it holds up. It doesn’t get all the artifacts and weird sounding.”

But like with all good foley work, the art is often in the performance. “If you step into mud and then you slowly pull out of it, you can actually get those little textures,” said Henighan. “That little half a second of a really interesting gush.”

The heavy, sticky stomps are only part of the Mind Flayer’s movement. The underlying sound of its tentacles stemmed from an old ironing board. “One of the tricks is recording different sounds, even taking stuff as simple as a door creak and pitching it really, really down, really low, a couple of octaves or more, and then looking for a sound within that pitched version of it that you can then attach to what the monster is doing,” said Henighan.

The power of the monster’s fierce roar came from a cocktail of sounds, including large mammals, such as elephant roars that Henighan has resampled countless times over the years, and dry ice. The real magic comes from how the various sounds are melded into a unified whole.

“Whether you record them yourself, or you’re finding sounds [from] libraries, It’s looking for stuff that has resonance and size and using techniques like pitching and layering different roars and different frequencies of different roars together to make him feel as big and powerful as you can,” Henighan said. “Obviously, reverbs can give you that weight and depth in certain scenes, especially in the cavernous mall.”

To get the roar right, Henighan studied the sounds of large animals, which change based on their position and demeanor. “You have to listen to what they’re saying and how they’re saying it out in the real world and apply that to this monster,” Henighan said. “Figuring out, ‘Okay, I wanted to start small because he’s crouched down,’ and then as he extends himself you wanted to make it deeper or louder. You look for visual cues and what the monster is doing and the context of the scene, asking, ‘How angry he is?’ You can’t just have the same roar 50 times in a row. It needs to have different textures and the context [matters].”

It’s that degree of nuance and variation that not only makes the Mind Flayer sound so frightening, but also make it seem so real.

This Article is related to: Awards and tagged Sound Design, Stranger Things