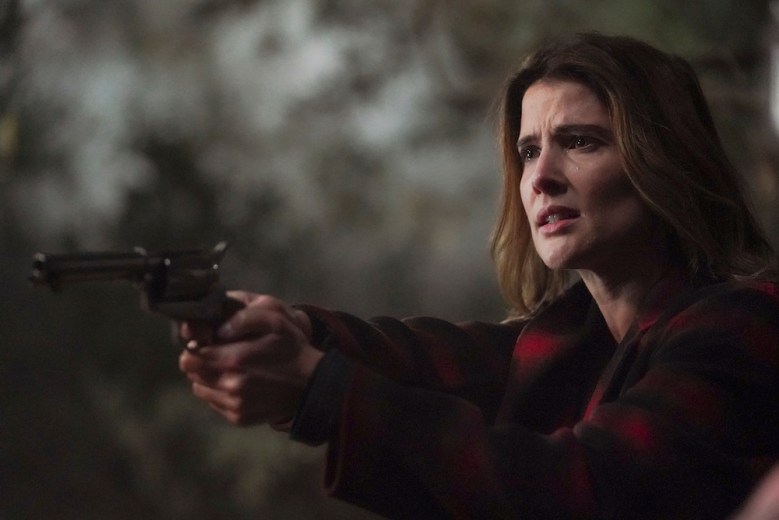 [Editor’s Note: The video interview above and article below contain spoilers for the “Stumptown” Season 1 finale, “All Hands on Dex.”]

Cobie Smulders didn’t want to end “Stumptown” on a cliffhanger. The ABC drama about Dex Parios, a newly licensed private investigator played by the former “How I Met Your Mother” and MCU star, wrapped its first season Wednesday night and, rather than leave viewers on the hook, the finale ties up one of the show’s biggest mysteries: What happened to Dex’s deceased partner, Benny?

“When you start storylines, especially as one as dramatic and affecting as this Benny storyline is, I think you’ve gotta have a conclusion,” Smulders said in the above interview with IndieWire. “I’m not a big fan of dangling the carrot, like, ‘You gotta tune in next season if you want to see more!’ It was important for me, and I think it was important for our writers, to feel that conclusion.”

Episode 18, “All Hands on Dex,” sees Dex track down who killed Benny (played by Sam Marra), bring them to justice, and better understand her involvement in his untimely death. Plenty of finales reveal game-changing plot points, but what sets “Stumptown’s” apart is how much ground it covers. While other broadcast dramas might have tried to stretch a tangled conspiracy over multiple seasons, “Stumptown” digs up just enough facts to allow Dex some peace, without closing the door completely on her past.

“I think the journey of this season has been [that] she hasn’t really known what happened; she thought she was responsible, and she’s been living with that guilt, shame, and in that darkness. Now, she understands there are all these other players in this storyline. Hopefully, she’s able to relieve herself of some of that guilt and shame.”

After solving the season’s central mystery, the finale sets up a brand new development for Dex in its final seconds: the arrival of her long-lost mother.

“There’s been some continuous storylines that are happening throughout the season, and Dex finding her parents and reconnecting with them has been one of them. […] We don’t actually see the mother [in the Season 1 finale], but I think that’s going to be a big part of the second season, if that happens. It’s always been a fascinating, emotional storyline — not just in [asking] what exactly happened to them, but in the harshness, really, of what these parents did to abandon their son and leave them in the care of one of their other children. […] It’s one of the causes of Dex’s bitterness. She’s just pissed off a lot of the time.”

As Smulders implied, “Stumptown” has not yet been renewed for Season 2. The drama ranks near the bottom of ABC’s scripted slate in same-day ratings, but strong reviews coupled with big gains in delayed viewing have fans hopeful we’ll see more of Dex’s adventures in the future. Given its ongoing serialized arcs and availability on streaming services, “Stumptown” should continue to see substantial viewership growth now that the finale is available, as many viewers wait for the season to end before catching up on their own timetable.

Watch the full interview above for more on the “Stumptown” finale, expectations for Season 2, and Smulders’ personal picks for what to watch while staying at home — after “Stumptown,” of course.

“Stumptown” Season 1 is available to stream on Hulu.