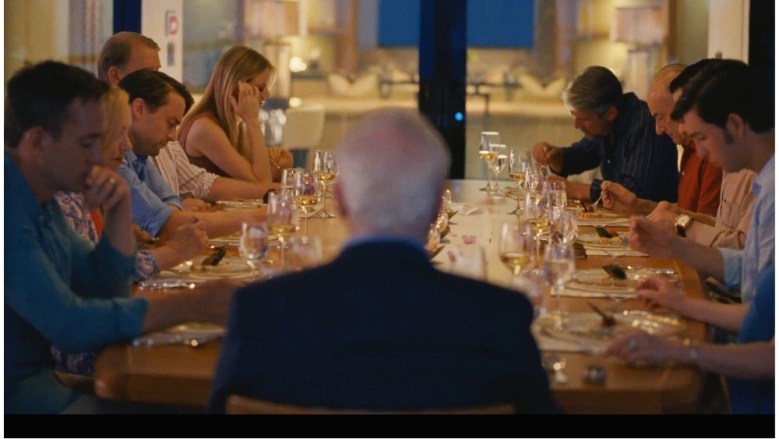 It’s part of the DNA of “Succession” that viewers travel with the Roy family to places of extreme wealth and privilege. In a serialized narrative with virtually no standing sets, most new episodes take audiences somewhere new and extravagant, and the Season 2 finale is no exception as everyone climbs aboard Logan Roy’s $150 million yacht.

But how does the filmmaking team behind “Succession” avoid fetishizing the extreme wealth they’re satirizing? Just the act of peeling back the curtain on the extreme luxury we never get to see has a natural voyeuristic pleasure for the viewer.

In the video essay above, production designer Stephen Carter, executive producer and director Mark Mylod, cinematographer Patrick Capone, and series creator Jesse Armstrong analyze how a subtle use of filmmaking craft directs the viewer to focus on the discomfort the Roy family feels inside its gilded cages.

In the video above, Armstrong marvels at how the “Succession” craft team makes everything feel somewhat like a hotel, capturing the depressing and transient side of their lifestyle, while Mylod and Capone break down some counter-intuitive choices they make with the camera and lighting.

“It’s almost an anti-aesthetic in terms of the craft,” Mylod said. “Everybody in filmmaking, to a certain extent, is unconsciously programmed to make things beautiful.”

In this video essay, Mylod shows how he’s led the “Succession” filmmaking team to fight that instinct and keep the series’ “jagged edge.”

Welcome to Deep Dive, IndieWire’s new podcast and video series that takes a detailed look at an exceptional piece of storytelling. This week, we’re lifting the hood on the Season 2 finale of ”Succession” — “This Is Not for Tears” — with creator Jesse Armstrong, executive producer and director Mark Mylod, as well as seven more members of the creative team and cast. You can listen to the podcast here, watch our first video essay here, and check out the production design video above.

“Deep Dive” is a recurring series of in-depth and informed discussions with the creative team behind significant film and TV projects. This video essay is presented by HBO and hosted by IndieWire’s Deputy Editor, Film and TV Craft, Chris O’Falt.