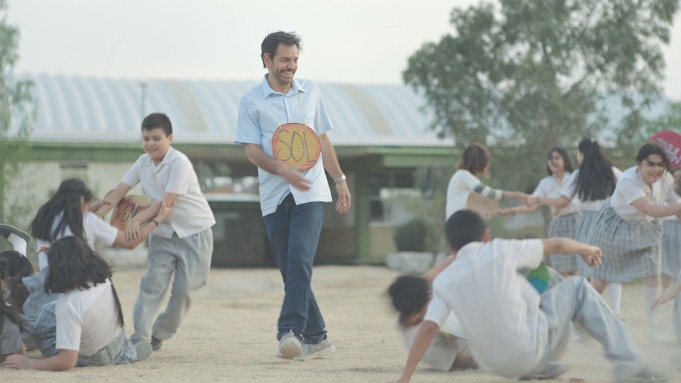 Director Christopher Zalla had a radical vision for bringing “Radical” to the big screen.

“I like teacher movies. I love teachers in my life. I wouldn’t be sitting here right now if I didn’t have teachers that inspired me to become a filmmaker, that unlocked that universe for me,” Zalla said. “On some level, this is a love story, a love poem maybe, from me to my teachers. But I think one of the things that is really interesting about this story is that it’s told in an environment we’ve never seen before, certainly with this kind of story.”

Zalla continued, “If there is a genre, we’ve generally seen those movies and kind of cultural realities that the implicit assumption is, ‘You’ve got to get an education! That’s the way to get forward.’ But this movie is taking place in an area where education doesn’t have a lot of relevance because there’s not that kind of opportunity going forward. This is a story about kids who on some level were being neglected, certainly by the system but even their universe. Dreams are not even possible.”

Set in a Mexico border town, “Radical” follows teacher Sergio (Derbez) as he pivots his teaching style to reach elementary school children amid the height of the drug war in 2011.

Producer Ben Odel, a frequent collaborator with Derbez, noted that he optioned Davis’ article seven years ago but had to wait until the right time for “Radical” to come out.

“To do that movie seven years ago might have been too soon,” Odel said, citing Derbez’s turn in Best Picture winner “CODA” last year. “And then when ‘CODA’ came to Sundance, we said, ‘Now’s the time.’ We went right into production after that.”

Odel continued, “One of the things that we try to do is look at our audience. How do we bring genres that they never get to see? Our audience has never seen a teacher movie. They haven’t had that experience, and one that is based on a true story that really elevates this character and puts Mexico on the map in a certain way.”

The film is seeking worldwide distribution in all territories, except for Mexico, amid its Sundance premiere.

Derbez noted, “We are watching this movie through their eyes, not their teacher’s eyes. I think that’s very interesting, very inspiring, especially in a country where it’s so difficult to have a good education. The fact that it’s based on a true story makes the film very powerful.”

“The kids in the movie didn’t act before, and it’s kind of astounding if you’ve seen the movie,” Zalla said. “Eugenio is being modest. He was also very helpful in the direction of the kids. But what I think was most incredible about these girls, they are so truthful. Kids were ad-libbing questions because they were actually curious about what he was asking them in class in the moment…I think that filmic approach is part of what I think makes the movie different as well.”

Zalla admitted to even being out of his own depth at times.

“We shot those classroom scenes in a way that’s completely foreign to me. I told Eugenio, ‘Sergio doesn’t know what he’s doing, he’s doing all this for the first time and so am I.’ Which was to say that normally I am a filmmaker where everything is super shot-listed and planned out and here I had 25 kids. I had chaos! So the decision was, we’re going to capture the chaos,” Zalla said, adding of the child actors, “I just want this thing that Eugenio said not to slide: They taught us so much.”