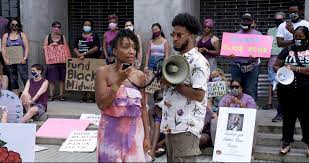 “I wanted respectfully to look at the description around ‘Black storytelling’ because personally, I do resist it,” Sundance Film Festival Director Tabitha Jackson said. “I think it’s something around considering this thing to be a monolith, and also imagining what a panel might be that was called ‘White Storytelling.’ It was like, ‘What?’ And then to think of White History Month.”

The 2022 Black Filmmakers Panel, moderated by Jackson and presented by Adobe, dove into the discourse around Black storytelling and what’s helpful — or not — when amplfying Black creatives’ voices.

While panelists Adamma Ebo (“Honk for Jesus, Save Your Soul”), Nikyatu Jusu (“Nanny”), Gabriel Martins (“Mars One”), Mariama Diallo (“Master”), and Tonya Lewis Lee (“Aftershock”) spoke about the marginalized “novelty” of being Black artists, the five directors also acknowledged the critical reception and labeling of films throughout history.

Jackson set the tone for the panel, asking for the filmmakers to destruct and discuss the categorization of their conversation.

“It all sharpens my desire to talk to you as having very particular perspectives,” Jackson said. “And that’s what Sundance and what I personally love about the subjective filmmaking that also is not necessarily trying to feed the marketplace. It comes from very distinctive perspectives.”

Writer-director Jusu responded, “I did comment on my disappointment with the ways that mostly non-Black film critics, particularly white men, have been engaging with the genre pieces and being really dismissive of the lived experiences of the characters that we’ve fought so hard and worked so hard to bring to the screen.”

The “Nanny” filmmaker added of the horror genre as a whole: “The things that certain people find horrific are subjective, based on their history, based on their lived experiences…To me, horror is these microaggressions that lead up and build up to these systemic issues. I think there’s a lot of horror that we’re maneuvering in this country today.”

“Master” writer-director Diallo said, “I think that there’s a way in which horror films made by Black artists are being received as kind of teaching tools for non-Black artists to receive, and also just as a novelty.”

Brazilian filmmaker Martins agreed that labeling Black filmmakers implies there is a monolith of artistry.

“I think we are just singled out as Black filmmakers and there’s a lot of expectations, and we maybe don’t even have the time to make mistakes,” Martins said. “Me being a Black filmmaker, I am still kind of a rare thing in Brazil. We don’t have a lot of Black filmmakers with feature films that went around the world, so this is really something new. This kind of identity is something that we’re still building and trying to figure it out.”

Writer-director Ebo pointed out that it’s “not even a bias, but a deficit” for people to assume anything about Black art, or try to compare new works to other stories told by different races.

“My experience with ‘Black storytelling’ has been particularly interesting because of my approach to tone and sort of this expectation being foisted on me about making things accessible to people, in their brains, who have what Black stories already are,” the “Honk for Jesus, Save Your Soul” writer-director said. “It’s like, I love the Coen Brothers, they’re some of my favorite filmmakers, but did y’all ask them about what to compare ‘Fargo’ to? No, y’all just let them make a weird movie about people from North Dakota. It’s like, why do I have to compare myself to another piece of art which is more likely than not going to be a piece of white art, in order for you to feel confident that I can tell my story?”

Jusu agreed, saying, “One question that is often asked of filmmakers is, who is your target audience? White male filmmakers are rarely asked that question. When in reality, their target audience is the white people the majority of the time.”

“Aftershock” documentarian, director-producer Lee, noted that Black filmmakers are now “working within a system that is really difficult for us to navigate,” with “gatekeepers” only now understanding that Black stories are “powerful” both in content and at the box office.

Or, as Diallo summed up, “How could I never make a film and not talk about my perspective? Then we’re doomed. I am glad to be able to now add my voice and say what the hell I want to say.”