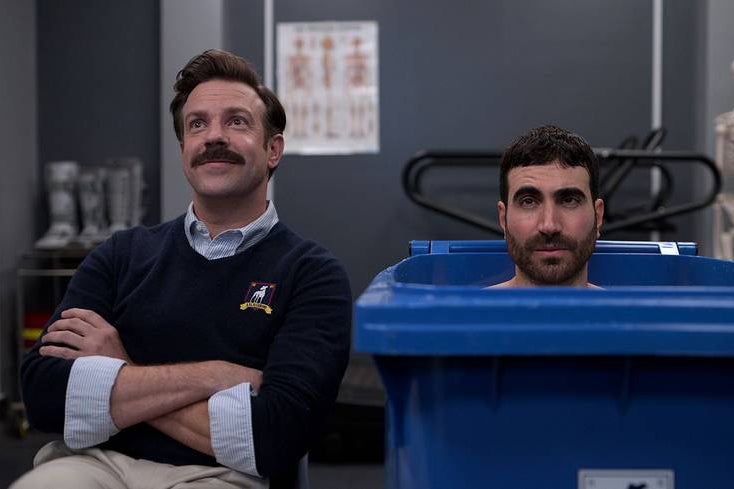 If you’ve already binged all of Apple TV’s delightful sitcom “Ted Lasso” and need more, the streaming service has you covered. In a recent 30-minute interview between star Jason Sudeikis and comedian Patton Oswalt the two discuss everything about the series, origins, and how the humor works so well on its audiences.

A key element of the series is the vulnerability of Lasso and the crew. “You can sniff out when someone’s truly vulnerable and when they’re not,” Sudeikis said in the above video, debuting exclusively on IndieWire. “And you have to be vulnerable to find your own voice.” The comic star says he tried to emulate every comedian back when he was starting out, eventually deciding to cast those other voices aside and finding his own.

When Sudeikis was first starting to pitch the series, alongside co-creator Bill Lawrence, he wanted to showcase a different side to masculinity — partly influenced by the toxicity of former President Donald J. Trump. “It’s poisonous, it’s awful,” he said. “But Ted is ignorant, which is allowed…but he’s curious.” Sudeikis said a lot of the character’s curiosity is inspired by his own father. “If you’re curious, you can self-teach and self-learn,” Sudeikis. As Oswalt points out, Lasso meets both good and bad people and is determined to teach them through perseverance and openness.

The various characters who do good, according to Sudeikis, are described as “angels,” providing happiness and joy without asking anything in return. “Agitation has a negative connotation, but it also makes diamonds and pearls,” Sudeikis said. “That’s what a good coach does.”

Sudeikis said the show plays with a lot of the sitcom conventions that have been established for decades, such as creating strong female characters and creating a universe filled with quirky characters. Much of that he attributes to Lawrence, the writer for “Scrubs.”

Oswalt and Sudeikis get into deep philosophical discussions about everything, from God and spirituality, to references to “Butch Cassidy and the Sundance Kid.” At one point even Oswalt is surprised at how complex their conversation gets. So if you have a half-hour to spare, catch up with the pair and then drop in and revisit “Ted Lasso” in full.

All episodes of “Ted Lasso” are now streaming on Apple TV+.