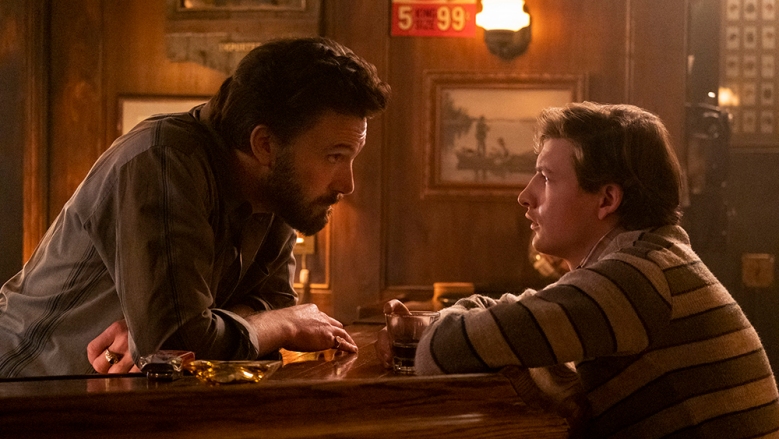 Consider This: Conversations highlight film’s award-worthy productions through panel discussions with the artists themselves. The above video is presented by Amazon Studios and hosted by Jim Hemphill. “The Tender Bar” is now in theaters and streaming on Prime Video.

“The Tender Bar,” director George Clooney and screenwriter William Monahan’s adaptation of J.R. Moehringer’s 2005 memoir, begins in the 1970s and immediately envelops the viewer in an ambiance of warm nostalgia — a comforting feeling that was entirely intentional, according to editor Tanya Swerling.

“We wanted to make a feel-good film, especially given what we’ve all been through these last couple of years,” she said on a recent panel. The story of a future writer (played by newcomer Daniel Ranieri in the childhood scenes and Tye Sheridan in later years) growing up in working-class Long Island with an absent father but a loving mother (Lily Rabe), devoted uncle (Ben Affleck), and eccentric grandfather (Christopher Lloyd), “The Tender Bar” is funny and moving in equal measures, with an inviting visual design in which every decision is connected to a specific point of view. “When I do a period movie, I come from the point of view of the emotional lives of the characters,” production designer Kalina Ivanov explained. “I’m less concerned with being fashion-forward or style-forward.”

To that end, Ivanov’s design of the Moehringer family home was not linked exclusively to the 1970s era in which the story takes place. “It was very interesting for me as a designer because the ‘70s and ‘80s tend to be over-stylized in film,” she reflected, noting that she and Clooney were after a kind of heightened naturalism in the house and other sets.

“The way I always approach something like that is, I’m not looking at the ’70s when the characters are living. I’m looking at, ‘When did they start their lives in the house?’” Ivanov calculated that the grandfather would have bought the house somewhere around 1944, and built the environment out from there. “You let it sit and decay for three decades until you get to the ’70s,” she explained, “so the wallpaper and furnishings are mostly from the ’40s, but then you’ve got the ’60s and ’70s touches with changes in the appliances and décor.”

Ivanov collaborated closely with director of photography Martin Ruhe, whose cinema verité approach was aided by the design of Ivanov’s sets. Utilizing a Steadicam and multiple cameras, Ruhe and Clooney often shot in 360-degree movements that gave the actors maximum flexibility.

“We wanted to be able to move quickly, both because of the limited time we had with the boy and also because we wanted to create a rhythm by going fast,” Ruhe said. “If you do a shot and it takes an hour or two to get to the next shot of the same scene, it’s a little dragging.” Ruhe felt that by lighting the sets simply and refraining from giving the actors too many stage directions, he was able to grab unexpected moments that yielded spontaneous and relatable emotional moments.

Like Ivanov and Swerling, Ruhe was aiming for a combination of naturalism and nostalgia, which led to him and Clooney discussing movies of the period like Dog Day Afternoon. “We told the story the way it could have been told in that time,” he said, adding that the ’70s influence was particularly evident in Clooney’s desire to use zoom lenses, both to reflect the period and to add comedy in certain scenes. For Swerling, finding the right perspective and rhythm was done on a scene-by-scene basis, as she intuitively responded to the moments captured by Ruhe’s camera.

“My goal is always for the audience not to notice any of the editing, so I feel like the choices we made were about what was naturalistic to the characters and the moments and the scenes,” she said. “So there were certain scenes with a lot of overlapping dialogue that are heightened with more cuts.”

In a scene where J.R receives a letter from Yale and everyone around him reacts with nervous energy, Swerling opted to “convey the inner turmoil that all of them are having” with a frantic energy in the cutting. At other times, as in a scene where J.R. tells his mother he won’t be spending Christmas at home, the editing is more restrained.

“We really let the moments lie there because we wanted you to feel that gut punch,” Swerling explained. Occasional scenes were even more stripped-down, with Clooney opting to play scenes out in one unbroken take; Ruhe recalled that a drive J.R. takes with his neglectful dad (Max Martini) provided one such opportunity, though the crew had second thoughts about whether or not the plan to shoot the scene without coverage would work as intended.

“We prepared coverage with side angles, but then we did it in two takes and George was very happy with it. George is not shy about decisions; once we shot the scene he said, ‘I have it. That’s it, I love it.’”

Swerling added that the director’s decisiveness made her job a pleasure as well. “George comes at things so well planned that there’s just not a lot of head-scratching, and the crew is so masterful that you just feel like you’re in it. As I was cutting it, I always felt like I was with this family.”

All three collaborators agreed that the clarity of intention was key to the film’s artistic success and their own personal satisfaction with both the process and the end result. Ivanov concluded that such fruitful collaborations largely come from knowing when to listen.

“Obviously I have ideas when I read a script,” she said, “but I also keep a very open mind about opposing views and other ideas, because it’s about really hearing what a director is after or what a D.P. is after or what a costume designer is after. It’s what I love about film — it’s such a collaborative art form.”

This Article is related to: Awards, Video and tagged Consider This, George Clooney, The Tender Bar