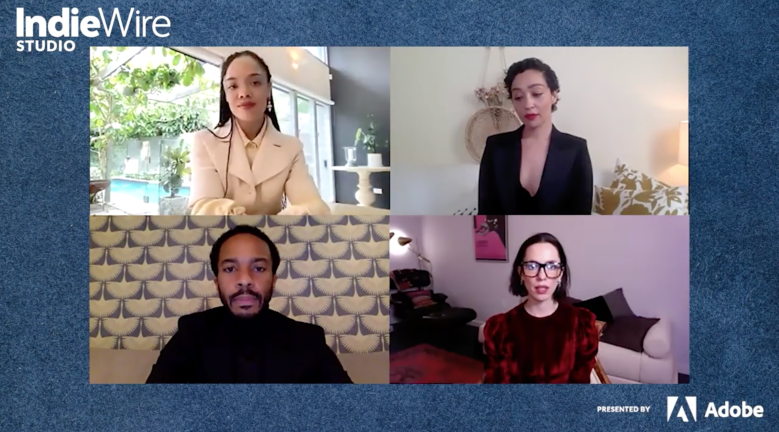 One of the most talked-about movies to burst out of this year’s Sundance Film Festival has been “Passing,” actor-turned-director Rebecca Hall’s filmmaking debut based on the 1929 novella by Nella Larsen. For her first feature, Hall directs Tessa Thompson as Irene and Ruth Negga as Clare, two Black women whose light skin in 1920s New York complicates their relationship to their communities: Clare is passing as white in Manhattan, while Irene has complex feelings about her identity, living in Harlem with her husband played by André Holland.

Hall’s mother is African-American, and her grandfather passed as white, which allowed the filmmaker to bring a personal perspective to the story. “When I got handed this book, it gave me a historical framework to put my grandfather in and to think about the choices that he made, or was forced to make, and how complicated it is; and also reflect on the legacy of passing in a family, what it means,” she said. In many ways, this is a story about race in America, yes… but it’s a story about the small, quiet ways living within a racist framework plays out on your perception of yourself, your interpersonal relationships.”

Hall added, “I don’t go through the world as a Black person. I don’t experience racism like that because of how I present. But I do have an experience of those other things that I’m talking about, and that the book talks about.”

Thompson hadn’t read the novella until she received the script, but said she was “just haunted by Nella Larsen’s work… I was struck by how Rebecca was able with such economy and grace and poignancy to adapt this piece. Both plucking directly from Larsen’s work, and also clearly trying to contend with questions around her own family legacy. The combination of those two on paper created this world that felt so immediate and urgent. I couldn’t shake it. It stuck to my bones. I still can’t shake it, having lived inside of the world of the piece for awhile.”

Negga, meanwhile, read the book in her early 20s. “I completely fell in love with it. It’s a masterpiece,” she said. “I couldn’t believe it wasn’t more well known, and I just developed this fascination with the idea of what it meant, and the history of passing…It was a scary option for a lot of people, and some people felt they had no choice, and what struck me was the psychological cost of it. Passing is essentially loss. You’re losing your community. It’s a community affair. You’re asking a lot of people to conspire with you. To have to cut off ties like that, a severing of one’s past, that’s a severing of oneself.”

In regard to the events of 2020 and Black Lives Matter protests following the deaths of George Floyd and Breonna Taylor, Hall said she was editing when the protests started, and that “it had an effect on me. I’m not sure that I can articulate exactly in relation to the film, but I had an environment in which I was editing,” she said.

For Thompson, the events of last year didn’t change how she views the movie. “Black Lives Matter was birthed out of something that’s always been true in America, which is that Black bodies are not safe, or are not valued,” she said. “This is not a new conversation. For me personally, I don’t feel like the events in the wake of George Floyd necessarily changed the feeling around the movie. The urgency around having conversations around race, the thing that Irene refuses to do inside the film, is the very reason I wanted to make this film.”

Watch the full interview with IndieWire at the Sundance studio, presented by Adobe, in the video above.