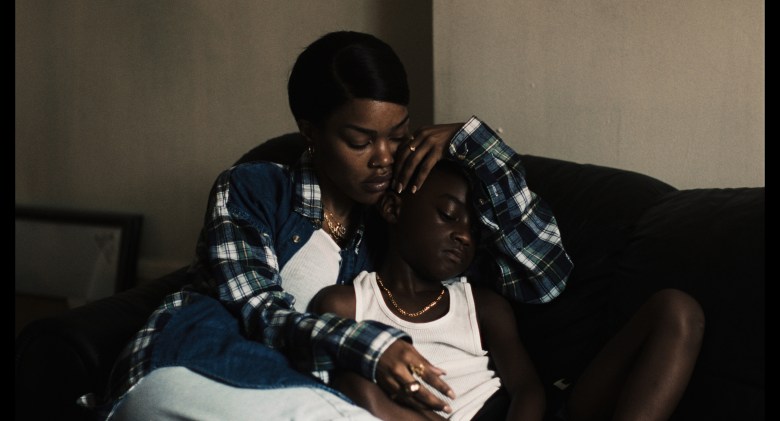 Teyana Taylor may have gotten love from leading an E! reality series, but the multihyphenate model, dancer, choreographer, and native New Yorker had trouble imagining herself leading the Sundance breakout film “One Thousand and One.”

Written and directed by first-time filmmaker A.V. Rockwell, the drama follows a homeless single mother who kidnaps her 6-year-old son from a foster home in the hopes of building a new life together. The film begins in 1994 Harlem and spans years to capture a changing New York City. “A Thousand and One” already has a March 31 release date from Focus Features.

“I really wanted to tell a story that honored the women that I saw as my heroes growing up, just the Black mothers who hold down their families and communities as matriarchs. I feel like inner city women, in particular, are really misunderstood and made to feel invisible, not only in society but within our own community,” writer-director Rockwell said during the 2023 IndieWire Sundance Studio, presented by Dropbox. “I really wanted people to see that Black women are heroes but not superheroes. In the same way we can fight for our men and our boys, please see our humanity and fight for us as well.”

“I really wanted the story to feel truthful to me and see New Yorkers in this,” Rockwell continued. “I would have loved to just street cast the role. But I knew what I wrote was so weighty that you really wanted somebody who had the chops. So I was like, ‘Where do you find someone who has the creative, artistic ability to take on this role, but also someone that has the connection to who this woman is in the real world so they can empathize and know her?’ It wasn’t until I saw Teyana’s take when I was like, ‘Oh. This is what I’ve been looking for.'”

Taylor sent in an audition tape along with the “hundreds” of other actresses being considered for the part.

“I’m really grateful that she did put herself on tape, being somebody who is well-established already and a celebrity,” Rockwell added. “It’s a very vulnerable thing to do, but I wasn’t going to cast my movie any other way.”

Taylor, whose credits include collaborating with top recording artists like Beyoncé and recently starring in “Coming 2 America,” shared that her Harlem roots are one of the thousand and one reasons she connected to the film.

“I’m from Harlem so when I saw that, I though it was super dope,” Taylor said. “I’ve never really had a serious role. I felt like I never got the perfect opportunity to be able to show people what I can do. This is going to change everything for me.”

She continued, “It was scary and fun at the same time. I had just had a baby. I was six months postpartum. As a mom, I was dealing with that. Life can come at you, but A.V. can protect you. She told me to put everything I was going through into Inez. I feel like I needed to go through that to be able to bring Inez to life. If she did this a year before, I probably wouldn’t have even been the same person I was when we actually did it.”

Taylor added, “I even brought in things from the past, all the people that didn’t believe in me, all the people who never gave me the opportunity or even stopped to watch my tape. Like, ‘Oh, this is Teyana Taylor and she’s a celebrity and she’s used to playing this kind of role.’ I put all of that into the person that I feel like believed in me at a time when I didn’t even believe in myself. I didn’t think I could do it. I put my hands up, I surrendered, I prayed. I felt like it was already written.”

In fact, it was: Rockwell had been haunted by putting this story onscreen for years. An alum of the Sundance Labs, Rockwell found inspiration in the gentrification of her hometown of New York City.

“I felt like a lot of the predominantly Black, or just communities of color in general…It just felt like as the city was changing, they were being targeted and we were being erased from the city,” Rockwell said. “That was hard to reconcile because as a native New Yorker who loves the city so much, it made me reflect that maybe the city never loved me, never loved us. Trying to reconcile that originally drew me to the story, and then Harlem being such a mecca not only for Black New York but just Black identity in general, for the African-American story on a global landscape, it’s just such a rich history of who we are. I felt like setting it there really showcased the level of devastation it means.”

Rockwell looked back to the beginnings of New York City as a whole, starting with the Dutch settlers.

“I wanted to know, what does this era mean in the greater picture of a city that is always changing, always evolving?” Rockwell added, clarifying that she purposefully set the film in the 1990s to chart how much has changed…and how much hasn’t.

“People who worked in the system felt so helpless. So to see where the city put its priorities where it’s supposed to be helping the people, I feel like that’s a recurring theme in big cities,” Rockwell said. “You see all the glossy things that are happening to New York.”

Rockwell previously discussed during IndieWire’s First Time Filmmakers panel how difficult it was to crop out Whole Foods and other major retailers in Harlem when trying to capture decades-old locally-owned bodegas for the period piece.

During the 2023 Sundance Studio, “One Thousand and One” actor Will Catlett compared Rockwell to filmmaker Mara Brock Akil. “They stretch you,” Catlett said. “You come with the things you want to do and the way she nitpicks, it just makes the story more beautiful. I want to thank you, because not only did it make me a better man, it made me a better artist.”

Like Catlett calling on other Black female directors when discussing Rockwell, the “One Thousand and One” filmmaker shrugged off comparisons to fellow New York-based artists Spike Lee and Martin Scorsese.

“Success for me is being able to do that in my own way, with longevity,” Rockwell exclusively told IndieWire’s Eric Kohn. “I haven’t seen a lot of examples of that for Black women at the highest level. Going from making one or two if they’re lucky to making movies consistently, that is what success really looks like to me.”

This Article is related to: Film and tagged A Thousand and One, A.V. Rockwell, Sundance, Sundance Studio 2023, Teyana Taylor, Will Catlett