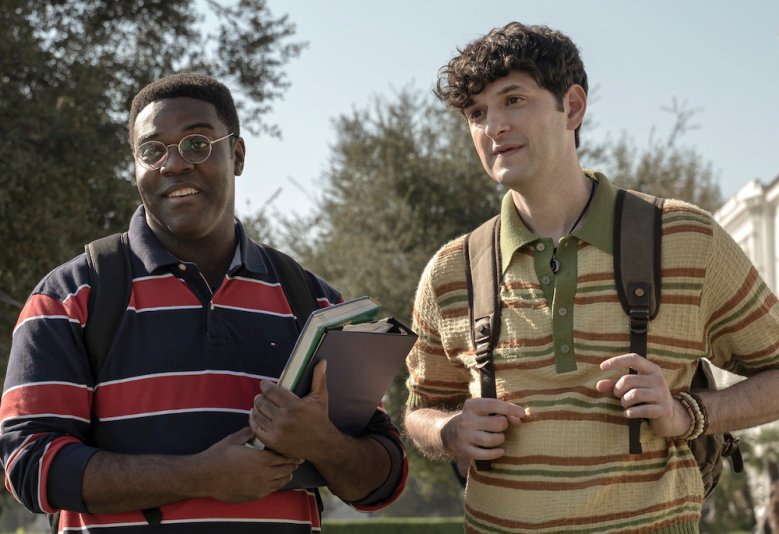 Before the afterparty, there’s the official party, and in the case of the Apple TV+ mystery-comedy “The Afterparty,” that initial get-together was a high school reunion. You know, when long forgotten faces reemerge, old friends reunite, and a mortifying past comes shrieking back to haunt the present. History hovers over reunions in ways both welcome and unnerving: Shared memories are a joyful recollection for some and an embarrassing imprint for others. Even for the well-adjusted few, getting a glimpse of once-adolescent classmates as fully formed adults can stir thoughts of time gone by. Feelings, dynamics, even full identities come rushing back.

But if there was no before, how does one evoke all of these emotions in the after? That was the challenge facing Sam Richardson and Ben Schwartz, two actors who had never met before they walked on set to play characters who were best friends in high school.

“I think the most we had met in the past was [when] we did a game show together,” Schwartz said.

“It was ‘Match Game,’” Richardson confirmed.

“So the first time we saw each other was… it had to be on set, in person,” Schwartz said.

“Yeah, it was on set,” Richardson said. “Also, with the COVID of it all, we were the first people we saw who weren’t our significant others, so we were [excited.] It was like instant love.”

Their immediate connection — forged by what Richardson calls “comedy brain,” which “all my true friends have” — helped them build a credible camaraderie between Aniq (Richardson) and Yasper (Schwartz), as the long-separated best friends joined forces to help solve a murder that went down during the afterparty. While Detective Danner (Tiffany Haddish) leads the formal investigation into who killed Xavier (Dave Franco), Aniq and Yasper are searching for clues and eavesdropping on conversations, not only to help identify whodunit but clear Aniq’s name from the suspect list.

As Schwartz pointed out, that made Richardson the ostensible lead of a genre-hopping limited series, where each actor had to play various versions of their character based on who was telling the story. Aniq saw the night as a romantic-comedy, Yasper as a musical, and other guests as everything from an action-thriller to a (admittedly apt) horror show.

“Sam is a movie star,” Schwartz said. “The whole show is really based off of Sam’s point of view. So it’s not just that Sam has to be funny throughout eight episodes; Sam has to do the heavy-lifting of someone trying to figure out what’s going on and someone who’s trying to bring everything together. Sam has to be the romantic lead, then he has to fucking rap. He’s prevalent in every episode, and the only way our show works is if you care about Sam, and Sam is able to sell, in a real way, his relationship with Zoe.”

“You could put him in any of the movies that are on your posters, and he would be able to pick that movie up and take you for the ride, while keeping you along with the plot and also making you laugh,” Schwartz said. “That’s a huge thing between what a supporting actor can do, and then what people who have to take the reins of a full franchise.”

“Now, I am going to cry,” Richardson said. “That is so nice. I really appreciate that.”

Watch their full interview above. “The Afterparty” is available to stream on Apple TV+. The anthology series has been renewed for Season 2, with Richardson confirmed to return.