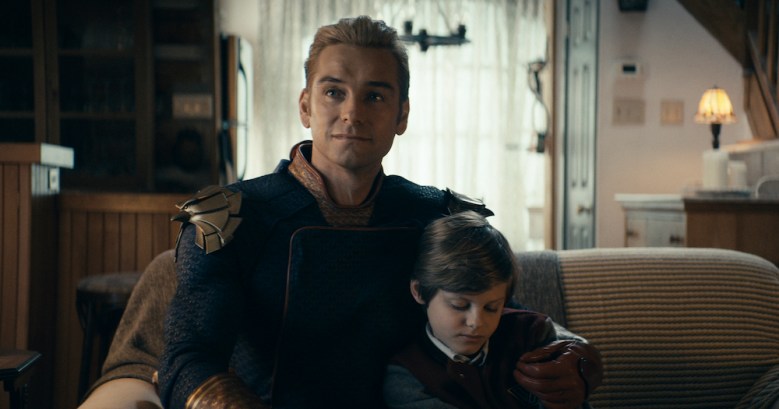 Consider This: Conversations highlight television productions through panel discussions with the artists themselves. The above video is presented by Amazon Studios and hosted by Zoe Hewitt. “The Boys” is streaming now on Amazon Prime Video.

From epic action sequences to intense emotional ones, some of the Emmy-nominated team who shaped Season 2 of “The Boys” sat down to reveal the magic that brought the show to life.

One of the season’s most charged storylines develops as Homelander (Antony Starr) strives to form a relationship with his son, Ryan (Cameron Crovetti).  Executive producer and writer Rebecca Sonnenshine scripted a scene in the finale during which Homelander and Stormfront (Aya Cash) take Ryan to Planet Vought for lunch together, though the experience takes a turn amidst a crush of fans.

“It’s almost like the first actual parenting moment that Homelander has,” Sonnenshine said. “He sees his kid’s struggling and gets him out of there.  It’s the first real moment that he has where he’s doing something for his son.”

Within that same scene, sound mixer Alexandra Fehrman and her mix partner Rich Weingart worked to dial in the balance.  When the sound effects and some levels were too loud it became “a little bit too comedic,” Fehrman said. The right combination of sound elements allowed the sequence to evolve realistically.

Even when composer Christopher Lennertz was tasked with writing a tribute song to Translucent (Alex Hassell) for the season premiere, it had to seem feasible as a true musical anthem. The directive: an Adele meets Celine Dion “Titanic” moment.

The song, called “Never Truly Vanish,” had to include “everything that someone expects from a power ballad: the bridge that gets quiet, and then it explodes into the last chorus,” Lennertz said. “And it needs the big drum fill and it needs that big lift and it needs that over-earnest super well-produced feeling.”

Erin Moriarty, who plays Starlight, performed the piece. Having been told the actor merely dabbled in singing, Lennertz said he was “giddy” during the recording process since her voice was far more powerful than expected.

Embedded in the lyrics are inside jokes with the audience, reminding everyone that “we’re totally aware of what we’re doing,” Lennertz said, citing the line, “And though we could see through you / it seems we never hardly knew you” as an example.

While nearly every exterior establishing shot includes details added by the visual effects team — for instance, the distinctive barn mural of Homelander with the rebel flag — they’re also called upon in more surprising ways.

In the scene when Alastair (Goran Visnjic) loses his head, the location used for his office prohibited the crew from using effects blood. So they shot the scene and then the production designer and team built a replica of the location for another take, this time with special effects. Then, the visual effects department combined both.

Whether the creatives behind “The Boys” are dealing in flashiness or realism, in the world of superheroes and satire, there’s plenty of each to go around.

For more about “The Boys” take a look at the video above. Seasons 1 and 2 are streaming now via Amazon Prime Video.

This Article is related to: Television and tagged Amazon Prime Video, Consider This Panels, The Boys