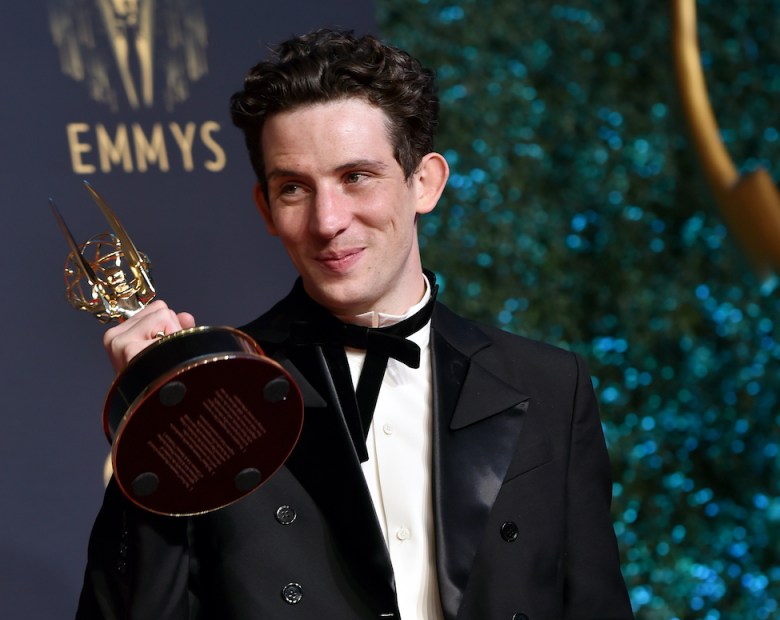 Last year — several decades ago in pandemic time — Pop TV’s “Schitt’s Creek” made history, sweeping all seven of the Comedy categories awarded at the Primetime Emmy ceremony, the first comedy series to do so and only the second program ever to accomplish the feat. (HBO’s 2003 limited series adaptation of Tony Kushner’s Pulitzer Prize-winning play, “Angels in America” was the first.)

No matter your feelings about the sweep, it was mesmerizing to watch, as the run of show meant that it unfolded in real time. Last year’s Pandemmys distributed its awards according to genre, with all of the Comedy awards, including Series, announced at the top of the show, with all of Limited Series and all of Drama following in turn.

The moment was memorable, but did you notice or know or care that this year’s Emmy Awards featured nearly the exact same history-making accomplishment? Me neither.

But seriously, with this year’s Emmys mixing up its run of show more thoroughly, plus a few surprising wins by the series in question, you might have overlooked the fact that Netflix’s “The Crown” swept all seven of the evening’s Drama awards, making it the first drama series, the third program overall, and the second show in two years to pull off the achievement.

Setting aside any feelings a person might have about the quality of “Schitt’s Creek” or “The Crown,” particularly with regard to where the shows may or may not fall within the greater TV canon, it’s fundamentally a bad thing that an accomplishment only experienced once before is suddenly a commonplace event.

Here’s why. According to statistics database Statista, 2019, the last full calendar year of production and release before the pandemic upended nearly every industry, film and TV included, featured 532 original scripted TV series. In 2009, that number was 210, meaning that in just a matter of years, the amount of original scripted series has increased more than 2.5 times.

With that in mind, why in the world would the Television Academy voters be awarding fewer shows, rather than making the most of the robust offerings of Peak TV?

My working theory? They aren’t watching enough of it.

And believe me, I get it. 500-some shows, at conservatively 30 minutes per episode and even more conservatively, eight episodes per season, we’re talking about thousands of hours of TV. No one, not voters, not critics, hell, not even unemployed depressives, have the time.

That’s a fine excuse for most of us, as we aren’t the people handing out awards for shows and performances and artistic endeavors and purporting them to be the best of the form. What the Television Academy and the Emmy Awards are doing isn’t enough. The voting system must be overhauled to better represent the current and ever-changing face of TV, lest the awards become increasingly meaningless in a cultural economy where the state of televised awards shows is already precipitous.

And it’s not just the “Schitt’s Creek” and “Crown” sweeps that are the issue. The further issue is the idea of being relieved that this year’s Comedy categories didn’t all go to a single show,  but was still only split between two shows. Keep in mind that with these mind-boggling achievements, most shows aren’t even eligible to accomplish a full-on sweep, as they don’t have roles for each acting category, i.e. “Ted Lasso” has no Lead Actress and “Hacks” has no Lead Actor. The reality is, if “Ted Lasso” had submitted its episodes more strategically during Phase 1, garnering only a single nomination in both Comedy Writing and Directing, it’s entirely possible the show would have bested “Hacks” in said categories, leaving it to win six of its seven eligible categories at the Primetime Emmys.

Introduce viewing committees to narrow down the field of competition that the wider Television Academy then votes on, institute mandatory viewing for voters, do something. Try something. It means nothing if you’re expanding the field of nominees if voters aren’t watching enough television to populate the categories with shows of the highest quality.

Do something. Anything. Make an effort. Because people who love television deserve better and so does TV itself.

Well, well, well, here we are on the other side of the 73rd Primetime Emmy Awards and what a night it was. To hear more about our Emmy aftermath, tune in to this week’s episode of IndieWire’s TV podcast “Millions of Screens” with Creative Producer Leo Garcia, TV Awards Editor Libby Hill, and Deputy TV Editor Ben Travers.

And believe it or not, this week’s episodes (officially) marks Episode 100 for “Millions of Screens” so if you’ve been waiting to start listening until we had a healthy back catalog, now’s your moment to dive in. Plus, stay tuned as Rube Man plays Amazing Kreskin and makes early predictions for the 2022 Emmy Awards. (He did make his “Ted Lasso” pick a year ago, after all.)

This Article is related to: Awards and tagged Emmy Awards, Millions of Screens, Podcasts, Schitt's Creek, The Crown