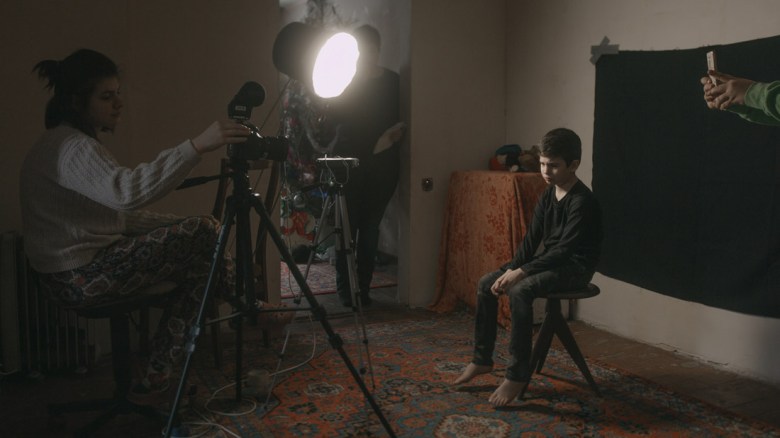 For Iryna Tsilyk’s feature-length debut, the Ukrainian documentarian and author chose to pursue a pair of subjects close to her heart: the embattled lives of regular Ukrainians living in wartime, and the healing power and possibilities of creation to aid them in even the most trying of times. The twinned ideas eventually turn into one emotional documentary in the form of “The Earth Is Blue as an Orange,” which is gearing up to debut at Sundance later this month.

Per the film’s official Sundance synopsis, the documentary “follows single mother Anna and her four children as they document their lives under siege in Ukraine. Eldest daughter Mira dreams of becoming a cinematographer. As bombs descend on neighboring homes, the family construct, act in, and edit stylized scenes of dangerous predicaments they’ve lived to tell. Mira’s re-creations ratchet up the drama, using local soldiers, tanks, and even her own grandmother to tell terrifying tales of survival. Meanwhile, Iryna quietly captures their more quotidian moments during their shoots and in between takes… Eventually, the two projects fuse into a single vision that gorgeously encapsulates the extremes of war, both its explosive trauma and its mundane peripheral existence in everyday life.”

“Apparently, not everyone in the world knows what war is,” said Tsilyk in an official statement. “In fact, our story is quite universal — so many people know what everyday survival means in this big cruel world, and all of us need some basic things to rely on: family, friends, love, art etc. I really hope that viewers will laugh and cry together with our subjects, as me and my team did.”

Added producer Anna Kapustina: “We’ve made this film about a family trying to collect the pieces of world through filming their family but it turned out to be a therapeutic experience for all of us: we’ve all become one family captured in a front-line city. We’ve all made our own way through war and despair to regaining our strength through people, and I’m honored to invite our audience to take this journey now.”

“The Earth Is Blue as an Orange” will premiere at the Sundance Film Festival later this month. If you’re attending the festival, check out screening times for the film right here. Following its Sundance premiere, the film will next screen as part of Doc Fortnight 2020, The Museum of Modern Art’s Festival of Nonfiction Film and Media.

The film’s poster, debuting exclusively on IndieWire, is also available below.

This Article is related to: Film and tagged Direct, Sundance, The Earth is Blue as an Orange, Trailers