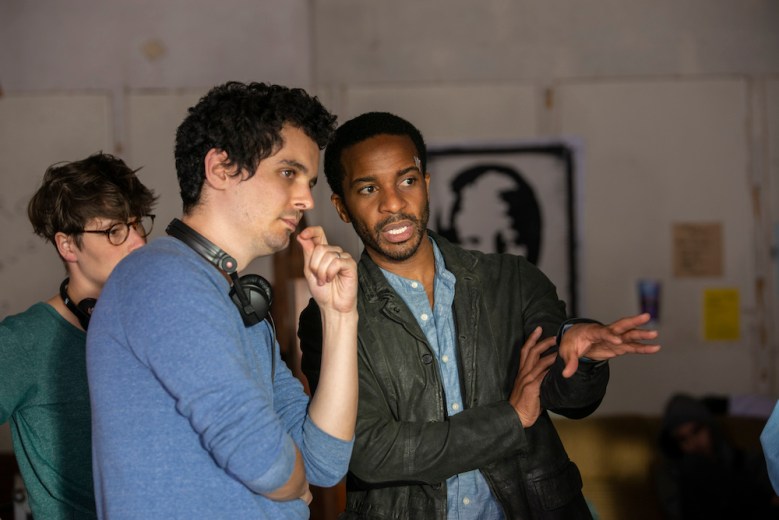 Years before “Moonlight” took him to the Oscars and “Castle Rock” expanded his fan base, André Holland found himself at a turning point in TV history. “The Knick,” a Cinemax original series, was made on the precipice of peak TV, as the medium was exiting the Golden Age. At the 2014 Emmys, as the final seasons of “Breaking Bad” and “Mad Men” battled the first entry of “True Detective,” small screen favorites Bryan Cranston and Jon Hamm went up against movie stars like Matthew McConaughey.

Holland wasn’t among that class of nominees. Neither was “The Knick,” which barely made it two seasons before being canceled. (Cinemax’s originals program eventually went with it.) But what could’ve been another waning speck among modern television’s ever-expanding constellation is still marveled over to this day.

Holland’s work plays no small part in the show’s prestigious regard, thanks to how he positions Dr. Algernon Edwards as a proud and reasonable foil to Clive Owen’s drug-riddled senior surgeon, and his collaboration with Steven Soderbergh proved as valuable as it was unique.

“Steven, I remember when we were doing ‘The Knick,’ he would often come in while we were rehearsing the scene and say, ‘OK, what do you guys want to do? What do you want to do with the scene?’” Holland said. “Clive and I, or whoever it was, would sit and figure it out for ourselves. He’d watch us put it together, and then he might come in and say, ‘Let’s move that to there and this to here’ — but there were other times where we’d rehearse it, and he’s say, ‘Great, lets shoot it.’ And the cameras would be up before you know it.”

Now, Holland has joined forces with another visionary director — “La La Land” Oscar-winner Damien Chazelle — on another ambitious production. With “The Eddy,” the duo shot in the streets of Paris, built a fully functional jazz club, and crafted lengthy scenes captured in continuous takes — all allowances not often afforded in television.

“Damien has a similar trust [as Steven],” Holland said. “A lot of the time, Amandla [Stenberg] and I were doing scenes that, on the page, were good, but she and I rehearsed a lot, so we had ideas about how they might be more interesting. [And] Damien would say, ‘Yeah! Try it! Go for it.’ For some scenes, there’d be a big improvisation. He trusted us in that way. For me as an actor, that means everything.”

For someone who’s not a trained musician, living in a character like Elliot Udo — one the best jazz pianists in the world — could be daunting. But Holland buckled down, learning what he had to learn — from chord changes to sheet music and proper posture to key strokes — because he understood that knowledge would be critical for the way they were shooting “The Eddy.”

“That was the most stressful part,” Holland said. “It’s amazing how much goes into it. […] Being able to sit in the posture that seems relaxed, have my shoulders relaxed, my hands be relaxed and ready — and then to try to act at the same time? It’s a tall order. Those were the toughest days.”

Chazelle’s style meant any falsities obvious to the audience couldn’t be hidden; he shot Holland’s performance with a floating camera, which meant rather than tracking him from one pre-plotted point to another, Holland was free to move wherever he needed at whatever speed matched the scene’s momentum.

“I think that’s what Damien wanted: just this sense that life is happening, and the camera is going to try to grab what it can,” Holland said. “For me, it felt really liberating to not feel stuck to a certain limited geography or certain rhythms — we could play and improvise a bit.”

The vérité Chazelle was aiming for springs to life in the first scene, as a live band plays in The Eddy and Holland’s Elliot moves around the room, sharing quick conversations and keeping an eye on a record producer who might sign Udo’s jazz group.

“When we shot that opening scene, I really started to understand what the language of the show was,” Holland said. “We would do a bit of [the scene], and I could just see [Damien] and the D.P. [Eric Gautier] kind of chasing us around. And I kept thinking, ‘Maybe I’m walking too fast or moving too much,’ and I said, ‘Hey man, do you want me to slow it down a bit?’ And he’s like, ‘No, no, no, keep doing it. We will follow you.’ So they just chased me around, basically, for the first two episodes. Poor Eric was exhausted by the end of it.”

Holland, a performer able to channel incredible authenticity, keeps you invested in Elliot’s growing list of worries, whether it’s an unhappy band member or threat to his family. Rarely has watching an empathetic figure face repeated frustrations been so rewarding, especially as Holland finds new ways to convey Elliot’s exasperation.

“That was one of the challenges,” Holland said. “He’s constantly running into walls, and I didn’t want it to feel like it’s the same moment over and over and over again. At the same time, each of those things has a different impact on him, and you want to honor the reality of what those challenges are. I think it was about knowing where we had to end up; knowing we had to tease this out for a while — not firing all the bullets on the first shot.”

The performance, the production, the director: It all adds up to another remarkable moment in television with Andre Holland at the center. After reuniting with Soderbergh for last year’s idea-driven, iPhone-shot “High Flying Bird,” Holland said he has another project with the director in the offing and is intent on creating even more.

Like a North star for audiences lost in a sea of too much TV, if there’s one thing we can rely on, it’s that Holland will continue to shine.

“The Eddy” is streaming now on Netflix.