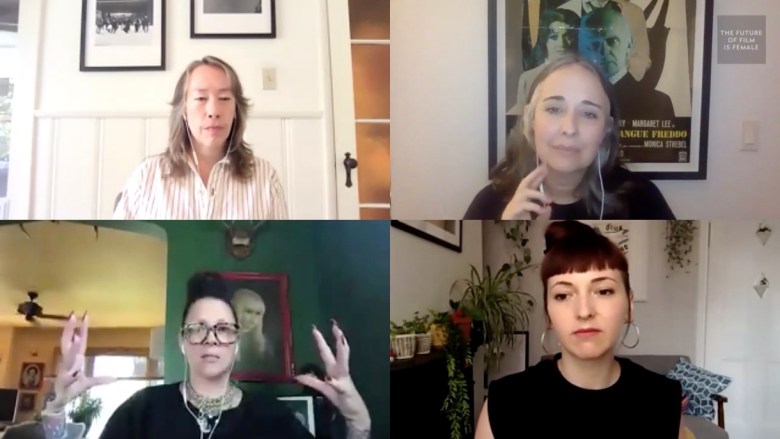 Some of the horror genre’s most thrilling offerings have sprung from the minds of female creators. After all, as filmmaker Jennifer Reeder notes in the video above, it was author Mary Shelley who literally invented the genre with her “Frankenstein,” and plenty of recent films have only further pushed forward that idea.

Recent horror efforts like “Babadook,” “A Girl Walks Home Alone at Night,” “Revenge,” “Raw,” “Always Shine,” and “Prevenge” have reshaped the space and expanded its possibilities. And that’s not stopping any time soon, thanks to both new work and new voices eager to create inside a genre that offers unique opportunities for exploring perhaps the must human of emotions: fear.

That’s a concept readily on display in this recent conversation between filmmakers Reeder, Karyn Kusama, and Prano Bailey-Bond, as hosted by the Future of Film is Female, an organization that amplifies the work of all women and non-binary filmmakers through their short film fund, commitment to exhibition, and community-building programs. The FOFIF has already hosted three panels centered on the horror genre and its creators in the past year alone.

The latest “The Future of Horror is Female” panel features filmmakers Reeder, Kusama, and Bailey-Bond in conversation alongside FOFIF founder Caryn Coleman, and is exclusively available in full on IndieWire.

Reeder and Kusama are both established names in the horror world — Reeder has directed films like “Signature Move” and “Knives and Skin,” along with a slew of short films; Kusama is the director of such features as “Jennifer’s Body,” “The Invitation,” “Destroyer,” and many more — while Bailey-Bond is somewhat new to the scene. The Welsh filmmaker’s feature debut, “Censor,” an ’80s-set offering set inside a world gone mad over fears of so-called “video nasties” that debuted at Sundance earlier this year and is now in select theaters, with a VOD release rolling out later this week.

Together in conversation, the trio found plenty of common ground, and they spoke about their own introductions to the genre, how the landscape is shifting for both the genre and its female creators, and what’s next. For the filmmakers, so much of their adoration of the genre comes from its inherent flexibility and the way it can stretch to include all manner of ideas and tones.

For Kusama, horror allows her to explore her own feelings about the world, in ways that other sorts of films might not so readily welcome. “I feel like we are a culture largely without ritual custom or practical applications towards healing, and I just felt like, ‘OK, that’s the horror,'” Kusama said. “We don’t have an ability to absorb or process grief as an instructive, transformative human experience. And so I started feeling like that’s something to devote a lot of my work to, not even consciously, but I think it’s thematically there.”

Bailey-Bond’s film is explicitly about horror, but she approached “Censor” as something that could, like all great horror, appeal to a wider audience. “I always felt it’s a mystery about horror that becomes a horror,” she said. “What I always wanted to do with ‘Censor’ was make a film that, somebody could come to it that doesn’t know anything about video nasties or horror and anything and enjoy it, but for the people that do know about this, they’re going to see the little signs and they’re going to see the winks and the nods, and you can be having another level of fun with the audience that way.”

Reeder said she was keen on bending the potential of the genre. “It allows for a kind of internal logic,” she said. “I love being able to play with that internal logic and building a kind of frequency in the film. I know that for me in particular, my films are not for everybody, but if you can get into that frequency, then those people really like it.”

Check out the full panel below, available exclusively on IndieWire, in the video above.

A Magnet Releasing release, “Censor” is currently in select theaters and will hit VOD on Friday, June 18.

This Article is related to: Film and tagged Direct, Female Filmmakers, The Future of Film is Female