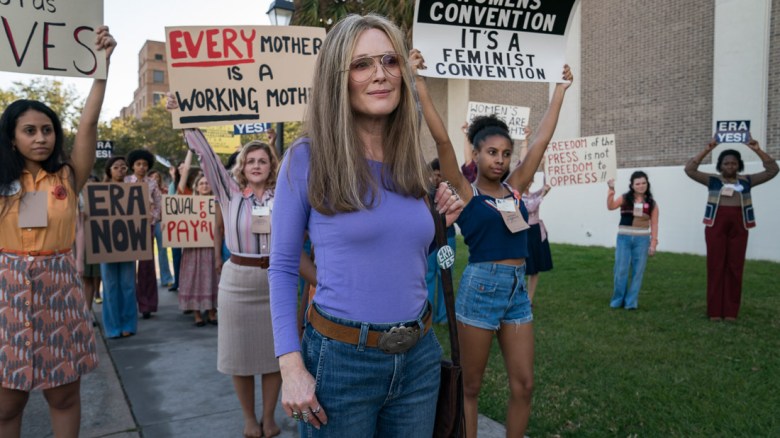 Julie Taymor’s creativity exists in the surreal. Among her most widely known works is the stage adaptation of “The Lion King,” featuring talking, singing animals that otherwise have no place in this world. That language continued with the Beatles musical film “Across the Universe” — where Uncle Sam’s giant hand comes to life and reaches off a poster and onto one character. That vision is present in her latest film, the Gloria Steinem biopic “The Glorias,” which premieired at Sundance. She told IndieWire she doesn’t really have to work very hard to come up with surrealistic visions of familiar stories.

The film stars Julianne Moore, Alicia Vikander, and Lulu Wilson as feminist icon Gloria Steinem at various ages. But their screentime isn’t constrained by time: They interact in scenes on a bus, such as when Vikander’s 30-year-old Steinem is confronted with a sexist comment but is unable to react — that’s when Moore’s older Steinem steps in to say what the younger one is thinking, but can’t say.

“I was able to use the various ages to express what was actually the interior monologue of the character,” Taymor said during an interview at the IndieWire Studio, presented by Dropbox. “Sometimes people say that I work so hard to create these surrealistic moments — now I don’t work hard. That’s the way I see things.”

Taymor explained how she was able to create that in the script she co-wrote with Sarah Ruhl based on Steinem’s autobiography, “My Life on The Road.”

“Those images, they come along when I’m reading, or I wake up in the morning, having dreamed the dream,” she said.

Taymor said after first reading Steinem’s autobiography four years ago, a newfound urgency to make a film adaptation emerged with the election of President Donald Trump.

“No one knows, really, what that whole second wave of feminism, which is humanism, by the way” is about, she said. “People, when they hear the word feminism, they get confused. This is really about human beings and equality.”

Taymor said Steinem reveals in her autobiography some of the women who influenced her, including women in rural Indian villages, and Dorothy Pitman Hughes (played by Janelle Monáe in the film) and Bella Abzug (Bette Midler)

This Article is related to: Film and tagged Julie Taymor, Sundance, The Glorias