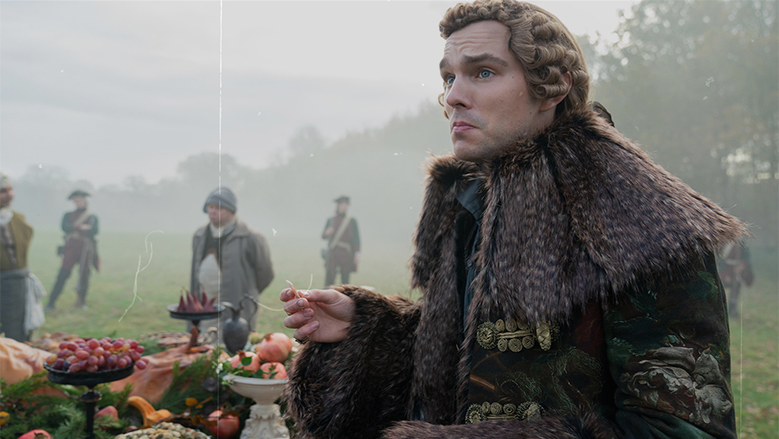 There’s an episode of Hulu’s “The Great” in Season 2 where Catherine (Elle Fanning) spurs her court to invent a literal rollercoaster, but it’s arguably the show’s deposed despot Peter (Nicholas Hoult) who goes on the wildest ride of the season. With Catherine ruling Russia, Peter has a couple opportunities to undo her coup but declines. Instead he spends a good chunk of Season 2 trying to tame his baser passions, improve himself, and win Catherine’s love, a feat made much more complicated when Catherine’s mother (Gillian Anderson) shows up and pursues Peter like seducing him is the last thing on Earth she’ll do.

Unfortunately for everyone, it is.

Talking to IndieWire as part of our Spotlight series, Hoult and series creator Tony McNamara discuss Peter’s journey throughout the season, as well as the joys and challenges of creating a character with Peter’s indelible mix of barbarity, verbosity, and hunger for truffles. Both Hoult and McNamara see Peter’s manner, from how he carries himself to how he speaks, to be a very important piece of how the show gets across its tone. “It really does combine low profanity and sort of absurdist humor and also incredibly savvy moments,” McNamara said.

For Hoult, the speed at which jokes fly and the incredibly wide swerves McNamara’s dialogue can take from highbrow to low and back again (sometimes in the same sentence) are almost like “a map through the mind of Peter, which is really fun to unpack as an actor because you get to play so many different levels within something.”

The moment that Hoult and McNamara found all of Peter’s modes of being came together this season came in Episode 10, “Wedding,” where he finds it in himself to sincerely apologize to Catherine for all his shortcomings. A big move from a character who, Hoult said, “you would never imagine that [was] possible.” For McNamara, everything that Peter and Catherine do is political, and so their relationship has a unique sense of scale and consequence to it. It allows Hoult and McNamara to make each swing of Peter’s mercurial personality thrillingly charged.

“He wants her to forgive him and that’s his first thing,” McNamara said of Peter’s wedding reception confession. “But there’s also this other aspect of him. He’s hung around in this kill or be killed situation, in a way, and there’s an element of, like, ‘I don’t really know what I’m gonna do.'”

For more on “The Great” with Nicholas Hoult and Tony McNamara, watch the video above.