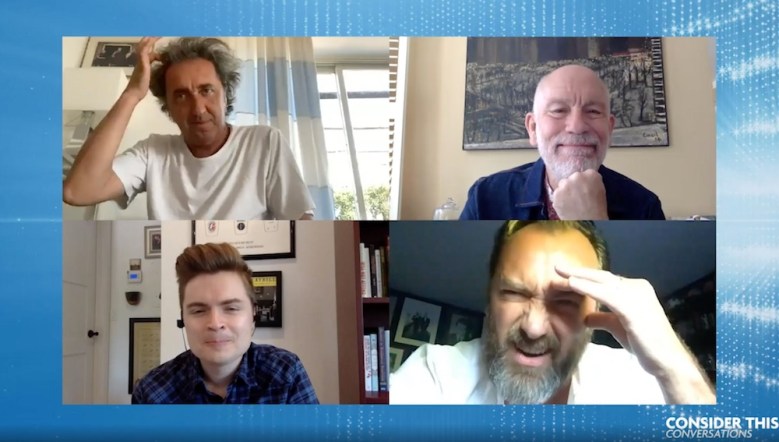 When “The New Pope” was first released, creator Paolo Sorrentino provided the press with a director’s statement on the follow-up to his Emmy-nominated HBO drama. The writer described his sequel as a story that “explores the ambition of two great popes — being forgotten.” Adding that being forgotten “can be a salvation,” Sorrentino framed “The New Pope” around two men from different backgrounds, facing different challenges, and with different faiths — but who were united by the same humble goal.

“It’s a sort of paradox because the priest chooses to become a priest because he wants to solve his sense of loneliness and solitude. But [becoming] a pope means exactly the opposite,” Sorrentino said, looking back on the magnificent season in an interview with co-stars John Malkovich and Jude Law. “[A pope] becomes the most lonely man. He’s completely alone. So the two popes decided to fade because the condition of being a pope becomes unbearable.”

In “The New Pope,” Malkovich plays the eponymous leader of the Catholic Church, Sir John Brannox. Before heading to the Vatican, John lives with his parents in a regal castle, preaching a moderate position and mourning the loss of his twin brother — a death his parents have never forgiven him for, despite his dedication to them and to God. For John, fading away is a temptation all too close to his reclusive lifestyle, and it requires great effort for him to take on such a prominent role in the church.

“He tries to accept more responsibility, and he probably has some qualities that could have made him an influential pope,” Malkovich said. “But a number of years ago I was doing a piece called ‘Just Call Me God,’ and I wrote [the] line: The one thing I know about power is that the good never seek it. I think that John is an example of that, but he’s also a fraud and a failure in that his brother was the profound believer; his brother, his twin, was the profound spirit; he was someone who possessed deeply-held religious convictions, not John.”

Most of “The New Pope” sees John reckoning with these contradictions. How can he become a great leader if his most prominent work is based on a lie? How does a great leader work toward being forgotten without diminishing his lifelong work? Further complications emerge when the church is provoked by a terrorist organization and Lenny Belardo (Jude Law), John’s papal predecessor, awakens from a year-long coma.

“The idea to make a sequel of ‘The Young Pope’ arrived to me during editing — during the terrorist attacks in France,” Sorrentino said. “All of us were very afraid and very scared. […] I thought it was something that was interesting to put in the world of the Catholic Church and to figure out how the Catholic Church would face this kind of problem.”

Lenny and John, once they meet, have very different approaches to the terrorists. John wants to do nothing: It’s the authorities’ role to handle any terrorist threat, and the church’s role to provide spiritual guidance. But Lenny, always more of an Old Testament pope, wants to use his own radicalized following to confront the existing extremists.

Herein lies the reason for Lenny’s need to be forgotten. His own issues are clouding the church’s path forward.

“I would say that Lenny saw invisibility and being faceless as a way of being forgotten,” Law said. “The action of faith and the faithful would ultimately be what defined him, historically. Therefore, by removing himself from the issue, it put the emphasis instead on the movement of faith, the movement of people. […] I think that ultimately came from a place of his own inner conflict with his own lack of faith.”

If these ideas seem extensive, they’re only a small part of “The New Pope’s” grand design. The inspired season also hones in on women’s long-repressed role within Catholicism, examines scandals hiding behind politics within the church’s administration, and even toys with the idea of what the second coming of Jesus Christ might look like in modern society.

Moreover, the impeccably crafted second season offers stunning visuals courtesy of Sorrentino himself, as well as director of photography Luca Bigazzi and production designer Ludovica Ferrario — both of whom earned Emmy nominations for their work on “The Young Pope.”

The popes’ goal may be to fade away, but anyone who watches “The New Pope” won’t soon forget it.

For more on the series’ magnificent (and authentic) costumes as well as the actors’ challenging homilies, watch the full video above.

“The New Pope” is available via HBO.