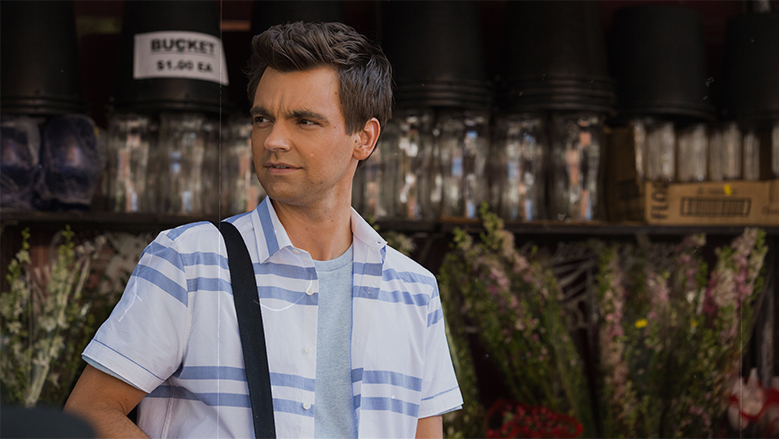 Despite how it looks, “The Other Two” co-creator Chris Kelly did not write the role of Cary Dubek, one half of the titular sibling duo fighting to step out the shadow of their teen heartthrob baby brother and talk show host mom, for star Drew Tarver.

“Everything we’re writing is sort of always based on things we went through in the writers room,” said Kelly in conversation with his show’s lead actor. “But then it’s interesting, because then you as the actor, you get the questions of like, ‘Is the character like you? Or how do you relate?’ Which is so interesting, because like, there probably are similarities, but I’m sure that must be so weird to be like, Chris wrote it.”

Tarver agreed, “It’s super weird, because also I have a younger sibling who’s in the music industry. People are like, ‘Wait, hold on, you just auditioned for that?’ I’m like, ‘Yeah, yeah, yeah, it just like synced up.’” In fact, Kelly joked, “We’ll write crazy things for Cary to do, and then we’ll be explaining it to you, and you’re like ‘I have done this, actually.’”

Although parts of Cary’s story are specific in ways that only Kelly and Tarver may fully relate to, his arc coming to terms with being gay, and figuring out where in the world he fits in, is a story previously untold on television that many viewers see themselves in. “Overall, as a bisexual person, I never felt like I knew myself that well,” said Tarver. “I really relate to Cary in that he doesn’t sometimes know who he is, and shit’s just coming at him. And he’s trying to build sort of like, ‘Oh, this is who I am while I’m on this ride.’”

Kelly expanded on that point, with an explanation of how “Cary is in an industry [where] people who know who they are and what they want rise to the top. ‘These are my skills. This is what I bring to the table. I think this is how I’m hireable or marketable,’ those people win, or succeed, or are celebrated. And so it’s very tricky to be a person that’s grappling with secrets, or concern, or not feeling comfortable in their own skin, but trying to be, like you said, on the ride of being like, ‘Hire me, want me, market me. Put me in your thing that I don’t even know what I am or what I bring to the table because I’m secretly trying to figure who I am,’ I think is an interesting thing about Cary that l had felt too.”

As Kelly, between sips of an end-of-the-workday Moscow Mule, vulnerably asked if the brilliant elaboration he just gave was even a sentence, his colleague Tarver assured him, “I feel you on that because sometimes I’m like, ‘Hey, you tell me who you want me to be? I’ll do whatever.’”

For more of “The Other Two” pair Chris Kelly and Drew Tarver in conversation, watch the video above.