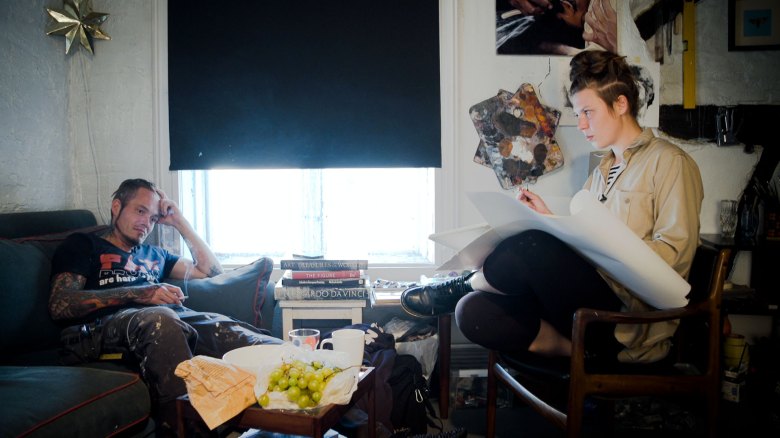 First conceived as a short documentary after director Benjamin Ree read about a curious case in Norwegian newspapers, the documentary “The Painter and the Thief” soon turned into a much larger undertaking. As Ree gained more access to material to tell the story of the unlikely friendship between artist Barbora Kysilkova and Karl Bertil-Nordland, the man who stole two of her paintings from a gallery, he knew it had to become a feature.

“I thought that the kind of premise of this film was really fascinating, but at that time back in 2016, I did not know where this story might end up or what would happen,” said Ree during a Q&A as part of the International Documentary Association’s annual screening series. The filmmaker had plenty of archival footage from one of Kysilkova’s friends who had documented the making of her art and had filmed the exhibition where the pieces in question were taken. There was also video from surveillance cameras.

More importantly, however, was that Bertil-Nordland was on board to share his account from a dark period in his life. “I had an opportunity to tell a story that not many people could or would about hope. And I have to remind myself many times that I was telling a story and that it was an important story to tell,” said Bertil-Nordland. Watch the video of Ree and his two protagonists chatting with Executive Editor & Chief Critic Eric Kohn above.

Aside from the material he was provided, Ree shot for 100 days, which amounted to 350 hours of footage. That enormous amount of content presented him with a structural challenge. His approach, admirably, was always guided by his desire to do right by his subjects.

“We wanted to portray Karl Bertil as the intelligent, charismatic, funny guy he is. We wanted to portray him as a complex person. And we thought that the only way to do that was to show the world from his point of view,” said Ree. This decision was not only the most functional narratively, but also an ethical choice. “They have to live with this film, the rest of their lives. It’s very important for that portrayal, I think, to be honest and representative.” To achieve that, he and his editor overlapped scenes showing them from both of the characters’ perspective.

“The film is about what we humans do in order to be seen and appreciated and what it takes for us to see others and help others. And since the film is our exploring those themes, I thought it was fun also to jump back and forth in time,” explained the director. “That makes the film self-reflective because that forces the audience to become an active watcher and… to think about the actual filmmaking process.”

Both Kysilkova and Bertil-Nordland have only seen the film once, the former at the Sundance Film Festival premiere and the latter on a computer screen. Neither has plans to ever watch it again. “It’s hard for me to go back to where I was then, to see the pain, the addiction, to see how low I was. That hurts me. So I don’t feel a need to go back there anymore,” said Bertil-Nordland, who is now sober and in school studying sports science.

For Kysilkova, the motivation was to share the personal journey she went through getting to know Bertil-Nordland with the world. “I wanted to show to people what might happen when we put aside any prejudices that we can carry it over to each other. And what happens when you just sit down with the person and you talk like human to human. That was my motivation to start the project,” she noted.

The experience of telling a story without a clear path and many questions, both moral and creative, along the way also helped Ree grow artistically.

“When you begin in documentary like this, you don’t know what kind of access you will get, and you don’t know if anything is going to happen in their lives, really… [There were] many turning points during the filming, and they kept on saying yes to being filmed,” said Lee. “Making this film has taught me a lot. This is the first film I made where I’ve taken some artistic chances, and that’s gives you some confidence, but it’s been a really difficult journey also…I’m very, very self-critical…making this film and how people respond to it had given me a bit more confidence in my filmmaking.”

This Article is related to: Film and tagged Benjamin Ree, International Documentary Association, Neon, The Painter and the Thief