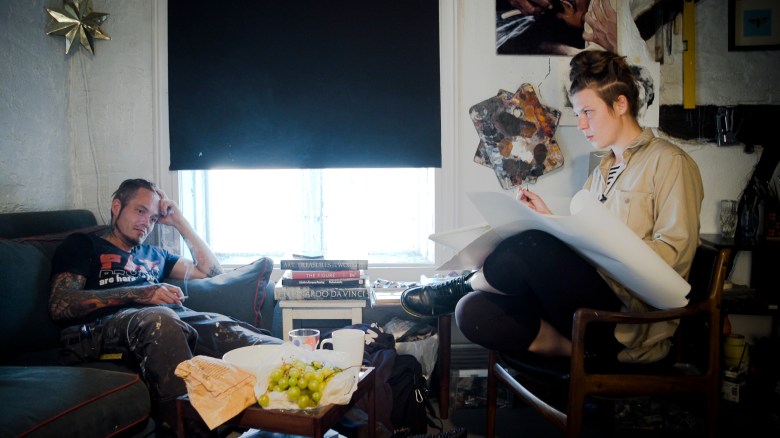 “The Painter and the Thief” captures the unique relationship that developed between an artist (Barbora “Barbar” Kysilkova) and a drug addict (Karl Bertil-Nordland) who stole two prize paintings from her first big gallery show. What’s remarkable is not only how director Benjamin Ree captured both subjects’ points-of-view throughout an intimate three-year journey, but also the way he was able to translate his subjects’ emotional states with his camera.

When Ree and Kysilkova were on the Toolkit podcast, the director attributed part of his success to the small documentary’s large lunch budget. The director would draw in his two cash-strapped subjects with elaborate food spreads at his office, where the three collaborators would have long talks about the movie they were making.

“I believe that it’s very crucial for a filmmaking process like this to meet up without the camera,” said Ree. “At lunch we’d talk about what we’ve already filmed, then we talk about what we with the film as a whole,” said Ree. “I think for a film like this you need approximately 100 recording days. That’s a lot of filming for two people who are not getting paid, so much of my job is to motivate them, but also involve them in the filmmaking process.”

The motivation often came in the form of hearing from his subjects which aspects of their lives and relationship they wanted to film, but also how they felt about the events, people, and places outside of that. “They tell me how they feel about something, but I don’t use it in the film,” said Ree. “I use it as a reference to find a cinematic language.”

In the video essay above, Ree talks about shooting the father-son relationship that Bertil-Nordland wanted to be part of the film. “He describes the mood, the atmosphere when he meets his father, and then I begin to think about how can we film this,” said Ree. “Of course, I need to my intuition to feel the atmosphere in the room, but it’s based on the talks with Karl and Barbara, how we can we make it represent their point of views.”

While Ree relies on his intuition, he also is drawing from the film catalogue running through his head and lets his favorite filmmakers inspire those choices. In the father scene, Ree relied on an over-the-shoulder shot that was inspired by Ingmar Bergman’s films.

To see how the “The Painter and Thief” borrowed from Sam Peckinpah’s “The Getaway,” and the works of Martin Scorsese and François Truffaut, watch the video above, To hear the full conversation, subscribe to the podcast below.

This Article is related to: Film and tagged Direct, Filmmaker Toolkit Podcast, François Truffaut, Martin Scorsese, The Painter and the Thief