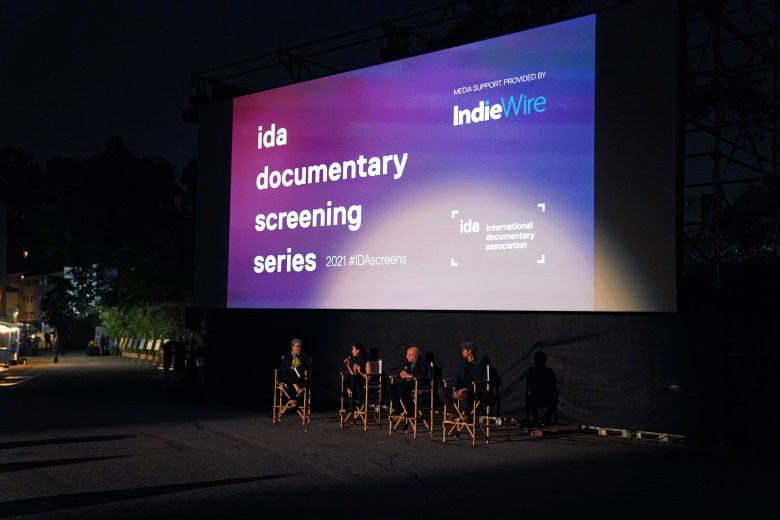 When filmmakers Elizabeth Chai Vasarhelyi and Jimmy Chin had the opportunity to tell the story of the Thai cave rescue, they felt privileged to bring the story that for nearly three weeks in 2018 transfixed them — and the world — to the big screen. But the “Free Solo” Oscar winners faced an immense set of challenges from the jump in their bid to precisely put on screen the factual and emotional truth of the extraordinary rescue.

“This was different from any film we’ve ever made before in that we weren’t present for the primary events,” Vasarhelyi told IndieWire’s Anne Thompson during a post-screening Q&A last week in Los Angeles, which kicked off the 2021 IDA Documentary Screening Series.

“It had every challenge in terms of nonfiction possible — there’s no footage, everything’s dark, no ones cooperating, it’s across the world, and its a pandemic,” Vasarhelyi said. On top of that, Netflix has the exclusive rights to tell the story of the rescued boys and their families, meaning none are featured in interviews in “The Rescue.”

“Screening it now, today, I think the poignancy, its core message, only resonates more, in that it really is about what connects us as humans, fundamentally,” she continued.

The film traces the rescue that unfolded over 18 days in Thailand’s Chiang Rai province, where military and civilian expertise from around the world coalesced to extract 12 youth soccer players and their coach from a flooded cave. They were located 2.5 miles from the cave’s entrance and ultimately needed to be anesthetized while in scuba gear in order to be brought to safety.

To tell the story with the level of precision the husband and wife filmmaking team are known for, Vasarhelyi and Chin enlisted major support from editor Bob Eisenhardt, with whom they also worked on “Free Solo” and “Meru.”

“Usually with documentaries, you have a pile of footage. In ‘Free Solo’ it was over 750 hours. In this film we had like, nothing,” Eisenhardt said.

The starting point on the two-plus year journey of the film’s production began with interviews with the civilian divers, including John Volanthen and Richard Stanton, who were instrumental in the rescue given their expertise in the rare and dangerous skill of cave diving. Other than that, the filmmaking team had collected YouTube clips with uncertain sourcing.

“It was a bit of a nightmare,” Eisenhardt said. “For over a year-and-a-half we got waves of material in. First there was some footage of the oxygen meter being read, then there was some footage that we got from (anesthesiologist Dr. Richard “Harry” Harris), which was the anesthetizing of the kids, which was amazing. Then we finally got some interviews with the Thai Navy SEALs, they gave us 10 minutes, five minutes — just a sample of (footage) we may or may not get, because the negotiations had been going on with them for two years before we actually got something. So we had this footage we cut in, but we didn’t know whether we could actually use it.”

The Navy SEALs footage included video of the boys being carried from the water to the cave’s entrance with the help of 200 people lined up in a human chain passing each boy, on a stretcher, from person to person.

Then came Thanet Natisri, a Thai restaurant owner in Illinois and self-taught groundwater expert who was instrumental in limiting further flooding of the monsoon-soaked cave. The filmmakers had interviewed him over Zoom for the film, and he’s interviewed on screen in the movie. But his role in the production was much bigger: Vasarhelyi calls him a “secret agent” and “guardian angel,” and he’s credited as an executive producer.

“She sent me the cut, and she told me that ‘When you see the cut you will know exactly what we need,'” Natisri said. “We went to Thailand together. Because I was deeply involved in the rescue, I was able to use my connection to the rescue workers to get them to come together and contribute their footage to our film.”

Even with that footage at their disposal, it could only go so far in sharing with audiences the experiences of being a part of the rescue. So Vasarhelyi and Chin shot recreations of some of the cave-diving scenes with some of the actual divers.

“The reenactments provided us a very important opportunity, during a pandemic, to actually understand what we missed. That’s the whole thing about nonfiction, you’re trying your best to allow audiences, whoever they may be, to experience what actually transpired. It was very strange not knowing that until we were in a tank at Pinewood, where the real divers were saying ‘This is actually what happened,’ and ‘No, it’s not like this, it’s like this,'” Vasarhelyi said. “The reenactments allowed us this opportunity to actually experience it emotionally.”