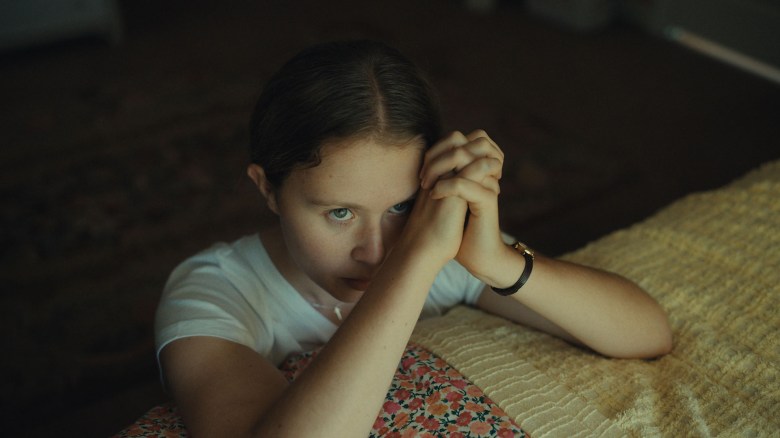 Parmet’s “The Starling Girl,” which premiered at this year’s Sundance Film Festival, details the twisted romance between a determined teen (Eliza Scanlen) and her pastor (Lewis Pullman) in a patriarchal fundamentalist church community. While some may immediately write off the drama as a genre film, Parmet pointed to the timeliness of the plot and her own personal connection to its storyline.

“We live in a very patriarchal culture. Like it or not, our country is very much affected by conservative Christian thought,” Parmet said during the 2023 IndieWire Sundance Studio, presented by Dropbox. “I think sexual shame is a universal experience for women.”

Parmet continued, “I had a similar relationship in this film when I was a teenager with an older man, and I had a lot of guilt about it afterward. I had a lot of agency in the relationship; I really pursued him and didn’t think about it for a really long time. I decided that I wanted to look back at my relationship and set it in this world that has a lot in common with our world and as a reflection of what we experience.”

Parmet reframed her own coming-of-age relationship after connecting with fundamentalist women at a rodeo in Oklahoma while researching another project.

“It was when I was spending time with these women that I started to think about it again and just kind of recognize this guilt that I had had, despite the fact that he had really taken advantage of me,” she said.

For “The Starling Girl,” Parmet spent months interviewing members of communities that experienced church abuse. The production brought on consultants during the script revision process and also to serve as a resource for the cast, which also includes Austin Abrams, Jimmi Simpson, and Wrenn Schmidt.

“It was important for me that that world wasn’t portrayed as…I didn’t want to be mocking or condescending,” Parmet said. “I wanted to make sure that the audience could be invested in these characters and these people and not be standing back watching judgmentally from afar.”

“Do Revenge” and “Dash & Lily” alum Abrams noted that working with a writer-director such as Parmet allowed for the story to change if needed: “Everything can move a bit more,” he said.

Pullman, who plays pastor Owen, addressed the unbiased perspective in capturing the grooming.

“If there’s spite from the beginning, you’re never going to be able to relate or see it as a mirror of sorts, and you’re never going to be able to learn from the movie,” Pullman said of playing the church leader. “If it does live in this liminal space that is a little bit hard to define and then it oscillates between knowing who you’re rooting for and what you want to have happen, I think that keeps audiences in a place where they’re more susceptible to applying to their own selves.”

The “Top Gun: Maverick” actor added, “If Owen was just being a straight asshole the whole time, guys would walk away from this movie going, ‘I would never do that.’ But then maybe guys will walk away from this and be like, ‘Damn, maybe I have done things like that, and I have to make some adjustments.”

Director Parmet stressed that, as in her own past relationship, Jem has “agency” throughout the story. “We never wanted to take that away from her,” Parmet said. “It’s important to show the more nuanced cases of abuse in those scenarios rather than just focusing on the black and white. Victimization is only one side of the story. Also at the end of the day, we want to tell a good story.”

And Parmet didn’t want to forget to seduce the audience into realizing that what Jem is experiencing is, in fact, her first love, no matter how abusive it is.

“What was exciting to me was to bring beauty into what she is experiencing, too,” Parmet concluded. “She learns something at the end. Does she come about it in a messed up way? Probably yes, but also that’s how life is. That’s how we experience and grow and change.”