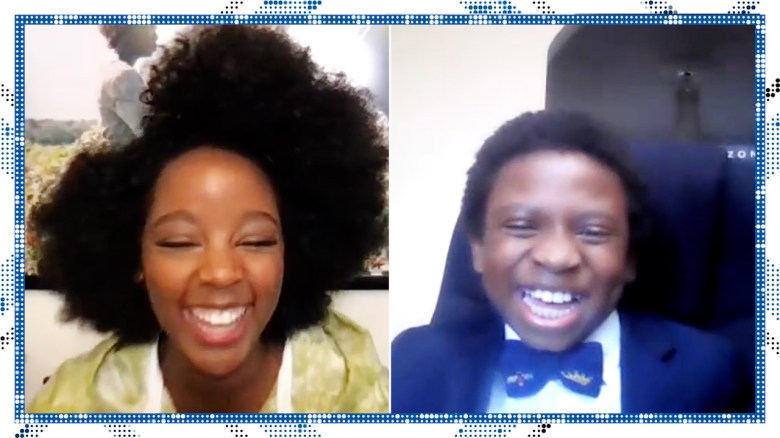 One of the things people don’t tell you when you venture into culture writing is just how difficult it can be to interview actors. Writers spend their entire lives communicating their thoughts with strangers and directors love nothing more than an opportunity to detail how each element of a project fell into place under their oversight. But actors are different. Their preparations are varied and often ephemeral. Some will suggest that their work largely boils down to, “I pretended to be the person I was supposed to be” and others will shout out the team of experts they worked with to perfect their performance. There are no wrong answers and brilliance can spring from anywhere, no matter a person’s process.

That doesn’t always make for a great interview, of course.

But occasionally you’ll come across a performer so studious, so careful, and so insightful that listening to them speak about their acting choices feels as though you’ve passed through that hazy realm that separates actors from the rest of us, allowing insight into the meticulous choices that translate into something otherworldly.

Thuso Mbedu is such a performer and in a recent interview with IndieWire, the star of Amazon Prime Video’s “The Underground Railroad” created a window for fans to peer through to better understand her transcendent portrayal of Cora, a young woman on a harrowing journey away from the only life she’s ever known.

What makes that same interview so special, however, is the fact that it’s done alongside her 11-year-old co-star Chase W. Dillon, whose presence ensures that no conversation goes too dark, gets too dire, or drowns in self-seriousness. In the series, Dillon plays Homer, the righthand man to Ridgeway (Joel Edgerton) whose sole focus is to capture and return Cora to the plantation she escaped. But in reality, Mbedu and Dillon reflect each other’s positive energy and obvious affection, creating a bright and slightly silly space to safely discuss topics that are anything but.

It’s this sense of chemistry and care that contributes so much to what creator and showrunner Barry Jenkins accomplishes in his adaptation of Colson Whitehead’s Pulitzer Prize-winning novel “The Underground Railroad.” Mbedu and Dillon admitted as much when recalling their time spent on set.

“Being on set, Barry was just there to help people,” Dillon said. “He got a counselor on set and personally, for me, he came up to me and you know, talked things out with me. And we’d both talk things out about the scenes that we were doing, how we’re going to do it. And so he made me feel safe on set. He made me feel safe away from everything. He made other people feel safe as well.”

“The truth is, Barry is very good with his words,” Mbedu said in addition. “He knows how to articulate his vision without imposing or feeling like he’s dictating. He can break it down in a way where he still gives you space to play and make your own offer, but guiding you into a place that it makes sense to the story. So I think having conversations with Chase, and with me with Joel, he had a great way of communicating with us so that we’re comfortable in exploring this world.”

Under Jenkins’ watchful eye and alongside Edgerton, the pair became a sort of found family on set, with real comfort and security, the better to safely traverse material that could easily grow overwhelming.

“More than anything, what shaped the dynamic of our relationship with Joel was the fact that from the very beginning, he made himself available to me, he told me that if he could be of support for me in any capacity, whether it was on-set or off-screen, because obviously, he’s been in the industry much longer,” Mbedu said. “This was my very first international job and he’s lived and seen things that I haven’t. And he made me feel safe with him saying that if I felt like there was something that I really wanted to say, but I didn’t feel comfortable voicing, he would be my mouthpiece.”

“And so I knew that I could trust myself to play and find moments with him. I never felt like a newbie or a rookie in his presence. We were all equal,” she said. “I was there to learn. He was also there to learn. And he will say time and time again that he also learned from Chase, you know? And so it’s nice to be in an environment like that.”

Chase W. Dillon and Joel Edgerton in “The Underground Railroad”

“I found him as my big brother. And we just had an on and off set chemistry. It went into our characters, Homer and Ridgeway is, well, our chemistry,” Dillon said. “And we would always just plan something. We always found a way to hang out with each other any way that we could. We had parties at our house. We had bowling alley parties, we had the whole works together.”

This is the environment in which Mbedu brought Cora’s journey to life, but for all of the friendships and frivolity, the protections and proactive decision-making, there is still a toll to be paid for traversing the psychological interior of a character whose entire life is earmarked with violent trauma and horror.

During filming, Mbedu would speak to her friends, whether in person or on video calls who would, if she was acting unlike herself, ask her, “What is the root of your emotion right now?” She would reflect and often times find herself realizing, “Okay, that’s more Cora than Thuso,” and force herself to recenter.

When I ask this of Mbedu, her answer is shocking, not because of its content, but because of the painstaking detail with which she’s able to explain.

The actress said that she first had to break Cora down and, consequently, develop her psychologically, emotionally, vocally and physically, to the extent that those developments could be reflected by her physicality at any point on Cora’s journey.

For example: “Episode 1, she’s on a plantation, her body is physically bent over cotton most of the day. So she’s a little bit hunched over. In Episode 2, she’s in Griffin, where she’s being taught to stand up straight, to be a particular way. So she is intentionally sitting higher than what she’s used to, but it doesn’t come easily for her because she’s bent over for most of her life.

But physicality is just one element in a performance. Mbedu revisited the process repeatedly, including for Cora’s voice.

“Like we did with the physical journey, going from Episode 1, I’m tracking that in Georgia. She’s isolated from her community. They speak ill of her. And so when she does say something, what does she sound like to a community that she feels like she has to defend herself from, but also a community where she hardly ever talks. So her English is a bit fragmented and broken. Because again, she’s trying to keep herself hidden. So she’s not practicing this English they speak.

“Episode 2, Griffin again, they are being taught and when she speaks English incorrectly, they correct her. How does that differ from Episode 1?

“Episode 3, we get there, she has to keep quiet. If you do not keep quiet, you die. They speak in whispers. So what does that do for her vocal journey? Or the dialogue that she has? Anything that she sees is mostly happening in her mind, so what does that sound like when she is allowed to whisper to Grace?”

Mbedu can, and does, go on and, in all honesty, her recounting her decision-making process is almost as mesmerizing as her performance as Cora itself, particularly when you recall a detail that the actress mentions only in passing early in her recollections.

Thuso Mbedu in “The Underground Railroad”

The things that Mbedu does, her impeccable calculation of where Cora is and why at any given moment is impressive, yes, but all the more so when you realize that “The Underground Railroad” was filmed out of sequence. Mbedu didn’t determine Cora’s reality in each episode and see it through from start to finish. She found those realities and moved between them, from scene to scene, from day to day, slipping back and forth on an emotional journey that only she can see, held in check only by an astrolabe built around one woman’s movement through space and time.

To call it overwhelming would be a gross understatement and pondering the magnitude of Mbedu’s performance could easily have derailed the interview, but for Dillon’s easy exuberance; his pure enthusiasm for anything and everything is a testament to his acting skills, as evidenced by his solemn, thoughtful performance in the series.

Through him, I see how “The Underground Railroad” was hewn. Through painstaking care and craft, respect for the stories being told, as well as an unflinching commitment to protecting the stories of the storytellers. Enveloping the creators with love and joy and release, to allow them to better delineate between the characters they’re embodying and the lives they’re living.

“We’re like, besties,” Dillon said. “I see her as my big sister. And it’s funny, because on set acting together, Barry would always see us hugging and talking. And then he would be like, ‘Hey, y’all stop hugging over there!'”

“I was actually going through like a couple of pictures on mine, like last week, and I realized how Chase and I were almost always together or, like, joined at the hip in between scenes. It was either he was with Joel or it was all three of us together. But we were really connected like that.”