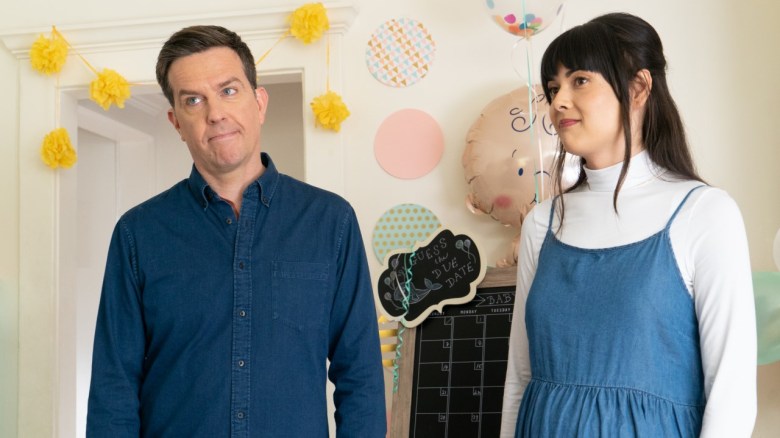 Nikole Beckwith’s “Together Together” has all the makings of a romantic comedy, but it’s decidedly non-romantic. In the Sundance film that already has secured distribution from Bleecker Street, Ed Helms plays a single 40-year-old man named Matt who, out of luck in love, hires Anna (Patti Harrison) as the surrogate to father his child. While Matt is eager to welcome his newborn baby into the world, Anna is, at first, far more blasé about the prospect of pregnancy, and sees herself as merely a vessel with no emotional attachment to the child to be. In other words, it’s not the kind of story we’re used to seeing onscreen about surrogacy.

“A lot of surrogacy movies there’s this dour, sad, ominous thing of, like, ‘I can’t believe I have to give up this baby.’ I think that’s also really connected to the way we view women as ‘women are meant to be mothers’ and deeply identify with that all the time,” Beckwith said. “We don’t talk about a male biological clock ever. It exists. Men want to be dads. I just wanted to tell a kind of positive story that divorces us from this idea of the all-encompassing female biological clock and leans more into the nuance of that.”

Helms’ character is more of a somber dude compared to the slapstick-prone guys he’s played in films like “The Hangover” series and the TV show “The Office.” “What people associate me with by default,” Helms said. “For a long time all I wanted to do was big ridiculous comedy. It’s why I got into show business… I’ve been so lucky to do that at a high level for quite a while, and I’m finding this very organic urge to spread my wings a little bit and do something different.”

When asked if he’s planning to revisit “The Office,” the long-running sitcom that put his name in the game and has, since ending in 2013, always stoked rumors of a revival, Helms said, “I’ve been answering this question on average 19 times a week…there’s not going to be another season. I’ll put it that way. That I’m aware of, or have anything to do with. Nobody’s asked me about it.”

Comic actress Harrison said that in making the jump from comedy to drama, as the movie tonally does, “the crying stuff” was the hardest, as the role demands some pretty emotional moments. “I’ve pretty much only ever done silly comedy stuff so that required a lot more work than I anticipated, but it was wonderful… Nikole and Ed are both very supportive and warm, and they always had little Mona Lisa smiles on their face most of the time. It’s nice to have that, because I feel a source of the friction as a comedian for me doing that was this dread of humiliation of doing a bad job.”

Watch the full interview with the “Together Together” team at IndieWire’s Sundance studio, presented by Adobe, above.

This Article is related to: Film and tagged Adobe, Ed Helms, IndieWire Studio, Sundance, Together Together