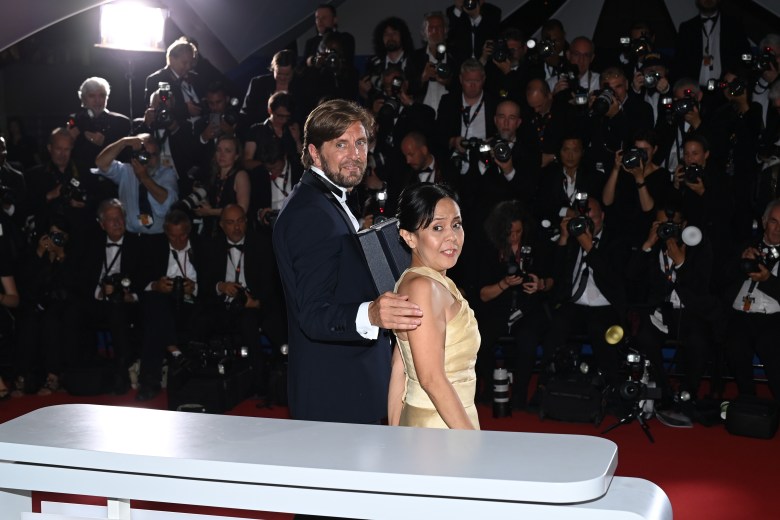 Writer-director Ruben Östlund always knew he wanted his film “Triangle of Sadness,” about a supermodel couple going on a doomed luxury cruise, to be an ensemble piece, but had a very particular criteria about casting the group of actors he needed to achieve his goal.

“You should get an experience of all the different kinds of faces, from Charlbi Dean and Harris Dickinson [who play] the two models [who] may be considered the two main parts,” the Oscar-nominated Swedish filmmaker told IndieWire. “You put up the pictures just next to each other, and you look at these different faces, and you’re thinking, ‘Oh, are they giving energy to each other?’”

As part of IndieWire’s Awards Spotlight series, Östlund was joined by the Neon release’s breakout star Dolly De Leon, whose character Abigail starts off a maid and then becomes more a menace in the film’s third act, to discuss how they developed one of 2022’s most dynamic supporting actress performances. “If you have not decided who is going to play Carl, it’s also hard to decide who is going to play Abigail. Because Abigail and Carl, they have a relationship in the movie and it has to work out, the two energies that these two actors bring in,” the director said.

Though veteran Filipino actress De Leon was nervous at first to audition for Östlund, she felt a lot more confident about playing Abigail, the eventual autocrat of the shipwrecked cast, when production commenced. “Ruben really gave me a free hand on how to play her,” said the star.

“One suggestion that Dolly had when it came to Abigail was that she shouldn’t have any children. And, of course, that is a very important aspect if you really want to stay on that island, and stay on top of the hierarchy, and not leave that island as soon as you have the opportunity,” said the director. “When Abigail arrives on the island, she understands quite quickly, ‘OK, the hierarchies that were on the yacht, they want to keep them on the island.’ They are not going to let her come up and be equal.”

De Leon could feel Abigail’s frustration in the moment, as the character is still looked down upon until she proves herself to be the group’s only hope for survival. “They’re taking all her food and her water. At that point, she realizes these people are really irresponsible, useless, unreliable brats,” said the actress. “And then moving into that fishing scene where they really prove that they’re so incapable of taking care of each other. That’s really the turning point. And when she decides they can’t run this island, she has to do it. Abigail has to do it.”

Since the film’s premiere at Cannes, where it won the highly coveted Palme d’Or, Östlund has gotten feedback from people disappointed that Abigail does not act more dignified than her rich, entitled counterparts, but said, “I heard a little bit about former dictatorships, for example, in Latin America where they have had a revolution. And they have replaced the old government, the old state with a new state, that corruption is very common, that corruption comes back, totalitarian systems come back, even if they’re trying to build a democratic solidarity society.”

“Triangle of Sadness” ends ambiguously, with Abigail contemplating murder in order to maintain her power. De Leon feels the character went through with the crime: “I would say probably 80 percent, yeah, she does kill Yaya, 20 percent, she doesn’t. So most likely, yeah, she does. … She has no real reason to go back to civilization. She has everything going for her there. She will definitely survive. She has a good sex life. She’s the queen. So why would she need to go back?”

Östlund actually got advice on how to shoot the scene from European film icon Michael Haneke, who suggested the camera face the actors’ backs. “But Dolly was playing so fantastic when it comes to the facial expression when she’s standing there with the stone,” said the director. “It was impossible to kind of be away from it.”

Watch the full discussion above.

“Triangle of Sadness” is now available in theaters and various digital platforms from Neon.