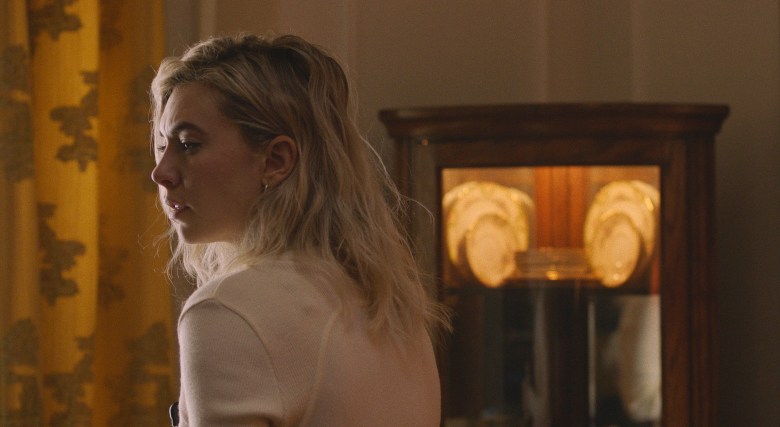 It’s exciting to witness a breakout movie star, and the performance that explodes that actor into wider recognition. Vanessa Kirby trod the boards in British theater before playing Princess Margaret in the first two seasons of Peter Morgan’s “The Crown,” which won her a BAFTA award. Now she’s up for Best Actress awards from SAG, the Golden Globes, and the Critics Choice Awards, en route to a likely Oscar nomination for her heartbreaking portrait of grief in “Pieces of a Woman” (Netflix).

After “The Crown,” Kirby made a series of career choices, from a supporting action role in “Fast & Furious Presents: Hobbs & Shaw” to “Mission: Impossible — Fallout,” and its upcoming sequels, opposite Tom Cruise. “I was really bad in sports, really uncoordinated, really clumsy, it was not a natural fit,” she said in our video interview (above). “The physical nature of these movies is like dance. So precise. I had to train really hard. Coming back to doing ‘Pieces of a Woman’ and ‘The World to Come’ was amazing, it felt so familiar, like doing a play in a full theater, where I was in my natural habitat.”

At last fall’s Venice International Film Festival, Kirby was delighted to experience both of her films in cinemas full of masked people, and where she accepted the Best Actress award. “I felt like a 13-year-old,” she said. “It was one of those monumental moments I will never forget.”

Kornél Mundruczó’s “Pieces of a Woman,” written by Hungarian playwright/screenwriter Kata Wéber, based on her own experience of a miscarriage, focuses on Martha, a young professional (Kirby) who is trying to reassemble her life after losing her first child in a home birth. The opening tour-de-force sequence, filmed in one long take, follows Martha and her husband (Shia LaBeouf) and their midwife (Molly Parker) through intensifying contractions and a hot bath to a traumatic, problematic birth and its tragic aftermath.

“Pieces of a Woman”

“It was so scary,” she said. “If I don’t get this right the movie falls apart and the viewer checks out.” Watching edited documentaries, Kirby felt the experience was somehow “sanitized.” Luckily she was able to find a woman who allowed her to stay in her hospital room as she gave birth to a healthy baby. “I absorbed every moment,” said Kirby. “I saw how the body took over. I saw a beautiful surrender. I look forward to that experience. It made me want to be a midwife, actually.”

Mundruczó filmed the birth sequence four times on the first day and twice on the second. “The three of us as actors worked together as a team like a play,” she said. “He used the fourth take on the first day. I was so tired!”

After this loss, Martha grieves and tries to move on, loses her husband, and struggles with her mother (Ellen Burstyn), who worries that she “is all locked up, she’s not talking about it,” said Burstyn in a phone interview, “not expressing pain or grief or anything, closed off.”

Ellen Burstyn, Kornel Mondruszco, and Vanessa Kirby on the set of “Pieces of a Woman.”

The two women come to an explosive face-off as the mother pushes her daughter to release her feelings. “I knew she would have to let it out,” said Kirby. “I was experiencing how hard it is to push something down so much it would have to come. Something has to happen here and her mother has to be the one.  Why does she snap at this moment? When I ended up screaming at Ellen Burstyn it felt like a relief!”

Kirby sees the movie as a journey from grief to life. “How brave it is to go through an experience like that and find the pieces of you and try to put the reality back together,” said Kirby. “The movie was a journey back to herself and healing things with her mother. There is a kind of grace this child has given them both.”

Burstyn reminded Kirby of Gena Rowlands, she said. Both actresses are “so blazing, fierce and vulnerable, with such fragility going on at the same time,” she said. “They’re kind of messy. As humans are. It’s so important to put messy women on the screen, not movie versions of women.”

“The World to Come”

The second movie that debuted at Venice, Mona Fastvold’s “The World to Come,” is a gay romance shot on film in rural Transylvania, and set in upstate New York in 1856. This grim, achingly beautiful pioneer drama tracks two farm wives, outgoing Tallie and reserved Abigail (Kirby and Katherine Waterston), who find release from domestic drudgery via a passionate affair.

“Vanessa has so much energy, a great sense humor and great timing,” said Fastvold on the phone. “Vanessa is someone you would fall in love with, charming and beautiful, but she has a lot of depth, and a deep voice with a sense of authority; she plants her feet down and stands up straight and makes you listen to her. One of them needed to be brave enough to dare to let the relationship progress.”

For Kirby, Martha and Tallie were like playing polar opposites, she said. “So much of the movie is about the cavernous space between people and how difficult things were for women. Women didn’t have a choice over anything they did, let alone who they loved.”

Going forward Kirby feels a responsibility to work with more female writers and directors. “So many stories haven’t been told before,” she said. “These are the women I want to see on screen, who are like my friend or my sister or like me. It’s important to find all the shades of that.”

This Article is related to: Awards Spotlight Winter 2021 and tagged awards spotlight winter 2021, Direct, Oscars, Pieces of a Woman, The World to Come, Vanessa Kirby