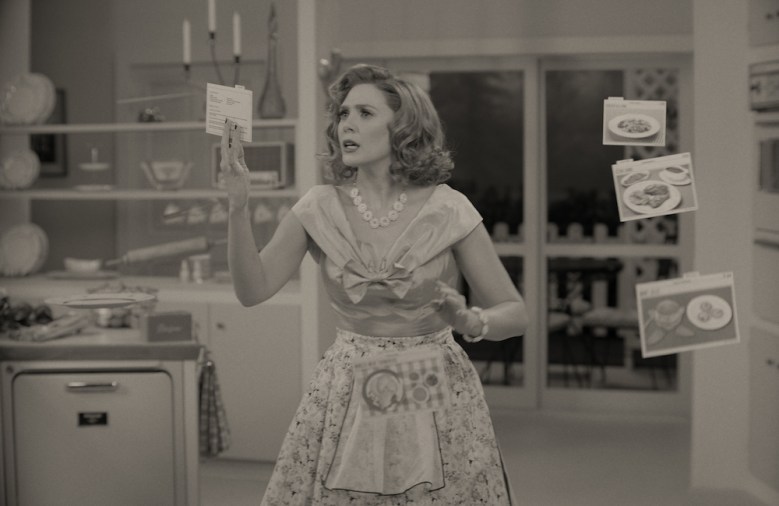 On Friday, January 15, a new era of the Marvel Cinematic Universe was launched, one that finally folded TV series into the overarching mythology and officially kicked off the beginning of Phase 4 (or as I like to call it, “So You’ve Defeated Thanos. Now What?”). With “WandaVision” making its bow on Disney+, fans are now living fully in a post-“Blip” world — an incident in which half of all Earth’s creatures are snapped out of existence, before eventually being reinstated — an event so seismic that it seems the world itself will never be quite the same.

Not that fans would have any personal experience with that, of course.

All things considered, “WandaVision” might be the weirdest of places for this phase of Marvel storytelling to begin, given that, while the show theoretically takes place in modern day, it’s (probably) playing out within the mind of its lead, Wanda Maximoff (Elizabeth Olsen), a.k.a. the Scarlet Witch, potentially as a way to process her trauma after losing her romantic partner Vision (Paul Bettany) during the events of “Avengers: Infinity War.” And in processing that trauma, Maximoff is using the tried and true framework of classic sitcom tropes, which results in black-and-white episodes and surprise visits from the big boss and, of course, the resurrection of Vision.

If all of that seems confusing, it’s because it is. As a person pretty invested in the MCU, very invested in TV (old and new), and whole-heartedly invested in watching Olsen explore the nuances of grief, “WandaVision” seems tailor-made for me. And yet, thanks to classic Marvel bread-crumbing and obfuscating for obfuscation’s sake, even I’m left wondering why this show exists.

(Disclaimer: Secrecy has always been of the highest order for the MCU and, as such, critics were only provided with the first three episodes of the eight-episode limited series.)

In extended discussions with colleagues in the industry, there are three schools of thought when it comes to “WandaVision.” They’re not mutually exclusive and your conclusions may vary based on your levels of cynicism.

Theory 1: “WandaVision” is a stop-gap storytelling measure, the better to fill the time between film franchise releases. Without a doubt, on some level, this is a main objective in creating not just “WandaVision,” but most of the other upcoming Marvel TV series. Buoyed by the success of “The Mandalorian,” Disney+ has proven a place that can host and promote new TV projects from existing IP, and do so effectively enough that it has earned Emmy nominations for it. So, yes, “WandaVision” definitely exists in part because of money.

Theory 2: “WandaVision” is an opportunity to breakout a singular story for exploration, a boon for fans hungry to know more about the day players who populate the MCU but would never justify their own film. This one probably holds true as well, given the obsessive nature of fandom, but also, the fact that within the Marvel Universe, Disney has a whole host of A-list talent under contract just waiting to be utilized. If you have Elizabeth Olsen and Paul Bettany just hanging around in the empty warehouse where I assume Disney herds all of its talent, why not make a limited series with them?

Further, there is an interesting story to be told about Wanda and her dearly departed Vision (fans familiar with Wanda’s adventures in the comic books can attest), and it appears that Marvel is aware of that. But are they willing to actually engage with trauma and grief, or are they using genuine emotional stakes as a false flag, the better to pull viewers into another weird conspiracy rabbit hole that only serves to further the overarching MCU narrative?

Theory 3: “WandaVision” is a story and a series that justifies its own existence, with its own narrative to weave, and its own emotional resonance to explore. Maybe? Hopefully? This is, of course, the best case scenario, not just for “WandaVision” but for any TV show. No showrunner, give or take a David Lynch, wants people walking away from their series scratching their head and wondering, “What the hell did I just watch, and why the hell did I watch it?” To be truly successful, “WandaVision” needs to find a way to justify its own existence, an existence that is more than merely functioning as a cog in the Marvel machine but, ideally, with its own agenda, with which it is primarily concerned.

It’s unclear if “WandaVision” clears this bar. It’s unclear if it ever will. Ultimately, Theory 3 is what every MCU series should be aiming for: an independent story that deserves exploration and, further, is best served by being told in episodic chunks. If Marvel can’t make that happen, maybe they should just stick to movies.

For an all out Marvel brawl and/or a respectful conversation about the nature of storytelling and finding a medium that matches your narrative, check out this week’s episode of IndieWire’s TV podcast “Millions of Screens” as hosts Deputy TV Editor Ben Travers, Creative Producer Leo Garcia, and myself, TV Awards Editor Libby Hill, discuss all things — except spoilers — “WandaVision.”

Plus, stay tuned for our critical take on the Critics Choice Awards nominations, as well as the announcement that Paramount+ is coming and nothing you or I do or say can stop it. But, honestly, what’s with the name?

This Article is related to: Television and tagged Direct, Disney Plus, Marvel Cinematic Universe, Millions of Screens, Podcast, Video, WandaVision