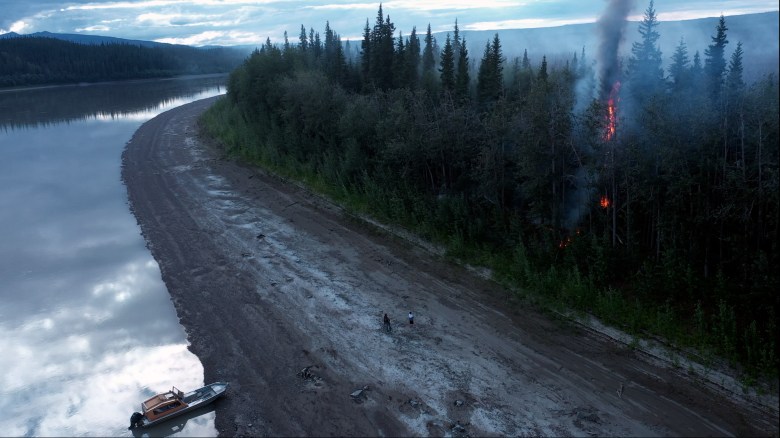 When ‘Life Below Zero’ debuted on National Geographic in 2013, the BBC Studios docuseries was one of more than a dozen Alaskan-set shows vying for the attention of unscripted audiences.

“’Life Below Zero’ started as a sort of David Fincher [inspired] horror show in Alaska,” executive producer Joe Litzinger told IndieWire’s Eric Kohn in a recent “Consider This” panel with the series’ creative team. “But over the years, I think the show has morphed into a show about character, a show about heart, a show about the why versus just the how.”

Having wrapped its eighteenth season in January, ‘Life Below Zero’ is currently competing for both Outstanding Cinematography for a Reality Program and Outstanding Picture Editing for an Unstructured Reality Program at the 74th Primetime Creative Arts Emmys. Its nominated episode, titled “Fire in the Sky,” chronicles outdoorsman and activist Ricko DeWilde teaching his children about climate change against the backdrop of a raging forest fire.

“This episode specifically with the fire was a golden nugget that fell from the sky,” recalled director of photography Michael Cheeseman.

DeWilde, his kids, Cheeseman, and the rest of the ‘Life Below Zero’ crew had been fishing when smoke caught their attention from the water. With two cameramen following on foot and Cheeseman piloting a drone overhead, the bulk of the jaw-dropping scene was shot in just twenty minutes: capturing the blooming blaze and the children’s stunned reactions in realtime.

In addition to the obvious benefits (“No show is worth an injury,” Litzinger noted), that hard-won expertise pays dividends across the series’ emotional resoance. To create “Fire in the Sky” demanded diligence, says editor Michael Swingler.

“I can see [the episode] on paper and I’ll say, ‘Oh, they came across a fire and, wow, this is going to be about how climate change is having this impact,'” said Swingler. “But I also want to see what the character tells me. This was a lesson from a father to his kids, to his children. It was climate change, but it was a lesson for their kids to see something that was natural, that was so — in that moment — catastrophic. It took out an entire island that was several miles.”

“We’re having to learn [the environment] even quicker now with our cast because there’s all these changes happening,” added field producer Crofton Diack. “And it’s not political. It’s just happening. It’s happening in our lifetime.”

“The people we film? If we’re not being authentic, they’ll call us out,” Diack continued. “We’re just following them along. It’s verité all the way.”

“It’s tough because everything in your fibers of your body wants to keep walking away,” said Cheeseman. “But you know that these characters are going to keep going towards it and our job is to keep going.”

“It definitely takes a special type of person to survive and be out there,” said Litzinger, before saying of the series future: “As long as the cast will continue to let us into their lives and as long as we can continue to go deeper into the storytelling and not be derivative of ourselves, [the show could go on] indefinitely.”

IndieWire’s Consider This Conversations brought together Emmy nominated cast and creative team members from five of television’s most prestigious shows to discuss some of the best art and craft of TV production of 2022. In addition to “Lucy and Desi,” other featured shows include Amazon’s “Marvelous Mrs. Maisel”, as well as Netflix’s “Stranger Things,” VH1’s ”RuPaul’s Drag Race,” and National Geographic’s “Life Below Zero.” Follow them all here.

This Article is related to: Television and tagged Consider This Panels, Life Below Zero, NatGeo