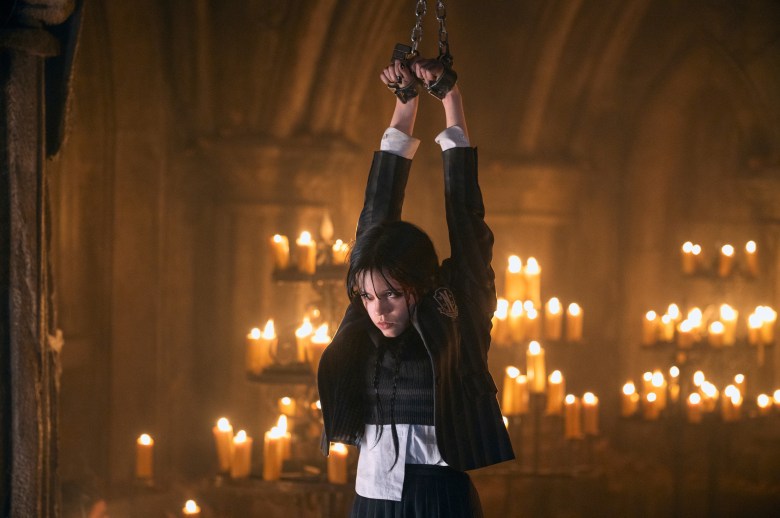 “Wednesday” is one of the biggest hits in Netflix history. An old-meets-new instant classic that pairs a stunning lead performance by Jenna Ortega with the moody atmosphere fans around the world have known and loved from Tim Burton. Composer Danny Elfman, costume designer Colleen Atwood, production designer Mark Scruton, music supervisor Jen Malone, and visual effects supervisor Tom Turnbull assembled for a panel moderated by IndieWire awards editor Marcus Jones. The quintet discussed adapting the iconic “Addams Family” franchise into a teen drama series and working with Burton, who directed half of the record-breakingly popular show’s first season.

Elfman is responsible for some of the most iconic music in film and television history, from “The Nightmare Before Christmas'” songs to the theme for “The Simpsons.” One thing the prolific composer and Oingo Boingo frontman hasn’t done, however, is write the score for episodic television — until this year, when he got the call from frequent collaborator Tim Burton about making the music for “Wednesday,” Netflix’s teen thriller series about the beloved “Addams Family” character.

“I brought on a partner, Chris Bacon, to work with me because I’d never done episodic television,” Elfman told IndieWire. “I was afraid that there was going to be a learning curve that was going to be kind of crushing. And it was. It’s like nothing I’ve ever experienced before, you’re dealing with delivering full scores, almost as long as a film score actually, every 10 days.”

Atwood, a 12-time Oscar nominee and four-time winner, is another frequent collaborator of Burton, having worked with him on films like “Edward Scissorhands,” “Ed Wood,” “Sleepy Hollow,” “Big Fish,” and “Sweeney Todd.” During the panel, Atwood explained that Burton told her in her first meeting that he wanted Wednesday (played in the series by Jenna Ortega) to be a character that existed in the real world but elevated. To create the character’s uniforms at Nevermore Academy, Atwood had a mill in London hand-weave the fabric from scratch. The most recognizable costume from the show — Wednesday’s school dance dress that she wears in her viral boogie to “Goo Goo Muck” by The Cramps — was found by Atwood almost serendipitously when she stumbled upon it in London.

“I saw a contemporary dress on Bond Street in London on a stand,” Atwood said. “And I was like, ‘Oh my god, this is the dress.’ I did some modifications to it to make it fit ad be more suitable for Jenna. But it was so together in on moment that I just knew it was the right thing for that without even knowing what she was going to do.”

Like other iterations of the “Addams Family,” “Wednesday” features Thing (played by Victor Dorobantu), a disembodied hand who serves as Wednesday’s sidekick throughout her investigations. Turnbull explained that the effects for Thing were done almost entirely practically, with Dorobantu wearing a bodysuit on set and hiding in setpieces with holes drilled in to successfully play the hand. Turnbull admitted he initially felt like it would be too challenging to do the Thing effects completely practically, but Burton insisted that he wanted the character to feel as real as possible.

“There was a really strong commitment from Tim to do it practically, and he worked with those limitations,” Turnbull said. “I mean, what we do in visual effects is try to be as real as possible on these things.”

In a locale benefitting Wednesday, the series shot its first season in Romania, after initially being set for production in Toronto. Scruton explained the move caused a shift in the overall look of the show, which was initially set to be more traditionally gothic revival before the architecture of Romania opened up new styles to play with.

“What Romania had was this sort of clash of different architectures and different styles sort of bumping up against each other,” Scruton said. “So it gave us a new sort of direction to head in which you try to incorporate along the way.”

Malone explained that, when they were deciding on the song for the dance scene, she initially wanted to use another Cramps song “Human Fly” before Burton suggested “Goo Goo Muck.”

“I was kind of like ‘Come on.’ This is perfect on so many levels, and just kind of fit her character, fit the mood, it fit the overall vibe, lent itself to this incredible dance routine,” Malone said. “I’ve always wanted to get The Cramps on a show.”

In addition to preexisting songs, the show also features a score from Elfman that incorporates elements of the iconic theme song to the original “Addams Family” sitcom — principally the finger snaps that have become widely associated with the franchise. According to Elfman, paying homage to classic music in franchises is something Burton has resisted in the past, when the two collaborated on “Batman” or “Charlie and the Chocolate Factory.” But because the snapping was relatively easy to incorporate, Burton was fine with it making the transition into “Wednesday.”

“There never was an easier thematic piece to pay homage to,” Elfman said.

IndieWire’s Consider This Conversations bring together the cast and creative team members of television’s most prestigious shows to discuss some of the best art and craft of TV production of 2022.

This Article is related to: Awards, Video and tagged Consider This, Consider This Panels, Danny Elfman, Wednesday