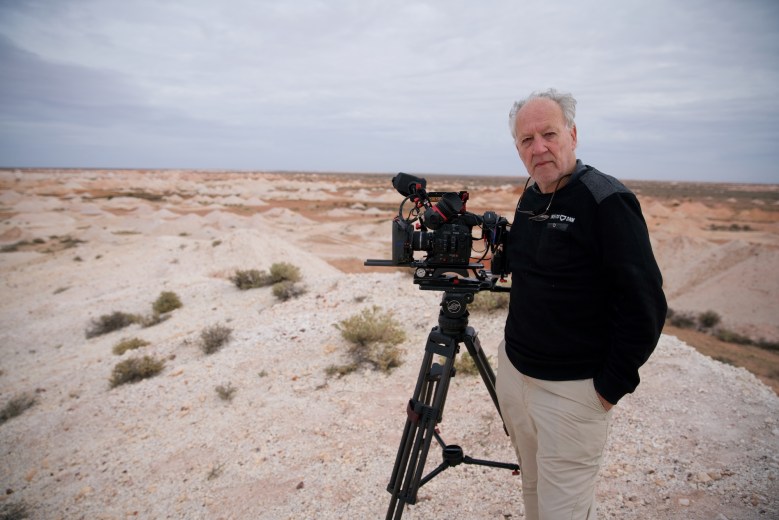 Werner Herzog is back with a new documentary “Nomad: In the Footsteps of Bruce Chatwin,” an interrogation of the work of his friend, the late travel writer who died from AIDS complications in 1989. While Herzog isn’t out in the field shooting, where he would normally be now, quarantine hasn’t at all stymied his productivity.

In a recent video conversation with IndieWire’s Executive Editor and Chief Film Critic Eric Kohn, Herzog discussed his new film and what he’s been working on, as well as his advice for filmmakers trying to work during COVID-19. Watch the video above.

“I do not explore glaciers and jungles and whatever. So you have to do what is possible and at the moment I cannot move out with my camera, but I do writing. Prose, and some poetry. Bruce Chatwin would have liked it. He was actually a great fan of my prose book, ‘Of Walking in Ice,’ where I traveled on foot from Munich to Paris,” Herzog said.

As for what he thinks filmmakers should do in the current moment, Herzog advised not to go out shooting until there is a vaccine.

“You do not go out unless you go out to an Arctic island, where there’s only a few penguins,” he said, while noting that Antarctica is suffering amid the pandemic due to the halting of scientific projects. In terms of production, he also added, “It’s a collective responsibility. You cannot be an employer of a large crew and send them out in a football stadium with lots of people. You just don’t do it. It’s a no-no, and you have to accept it. Actually, it’s a no brainer.”

Herzog also talked about his character on the Disney+ series, “The Mandalorian,” a role that remained shrouded in secrecy until the series premiered on the platform in November 2019. “It’s a new and weird experience,” Herzog said. “By saying something casually, half a sentence, all of a sudden there are tens of millions of responses on the internet, just saying something about Baby Yoda! Half a sentence triggers an avalanche of responses on the internet. That’s of course something new and I have to be cautious, and in a way, these sorts of things distract a little bit too much from what I really do.”

This Article is related to: Film and tagged Direct, Video, Werner Herzog