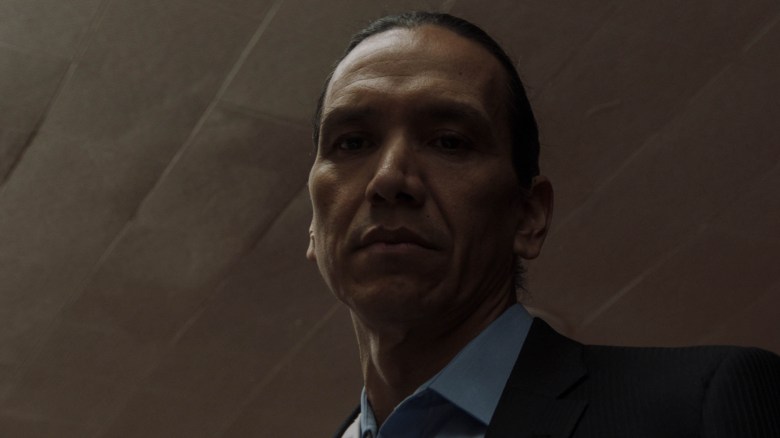 With nearly five decades of experience between them, actors Michael Greyeyes and Chaske Spencer have played a range of Native characters on screen. But there’s something remarkable that happens when acting in a production written and directed by another Indigenous person, as they did in Lyle Mitchell Corbine Jr.’s “Wild Indian.”

Spencer put it this way: “It was the first time I felt like I was an artist, a real artist working with my peers. To just work, not worry about anyone else’s’ interpretation of how we should be, or how I think it should be against the director.”

Greyeyes described a similarly empowering experience acting under Corbine’s direction. He said Indigenous actors have almost a “double consciousness,” operating with the knowledge of their communities, but also with the awareness of how Native people have been portrayed in media.

“I’ve always looked at my work as a chance to reeducate, or maybe inform correctly for the first time, people who don’t understand our past, our cultures, because of misrepresentation. When I work with Indigenous directors, I don’t have to correct everything. I don’t have to go ‘OK, so that’s completely wrong,'” Greyeyes said. “What that allows me to do with a director like Lyle is further the goals of the performance, work to further the goals of the storytelling … in the end, it allowed me to do what I was hired to do, which is deliver a performance.”

An exploration of generational trauma, identity, and atonement, the film marks Corbine’s first feature. Corbine said he wasn’t even aware there are Native filmmakers until Bird Runningwater, who leads Sundance’s Indigenous programs, came to his reservation to screen films from Indigenous directors.

Though it took him a while to use film to tell stories from his perspective as an Anishinaabe man, once he did, he hit a stride: his shorts “Shinaab” and “Shinaab, Part II” premiered at Sundance in 2017 and 2019.

“I spent a lot of time in the trenches making no-budget films, all kinds of films,” Corbine said. “I was messing with every kind of genre, like guys in rooms pointing guns at each other talking big, dramatic dialogues; zombie films, stuff like that. I think I developed a way of doing things before I ever started to write super personally. When I actually got around to writing personally, I was able to use that language that I already had started  developing with that new kind of personal storytelling.”

This Article is related to: Film and tagged IndieWire Studio, Sundance