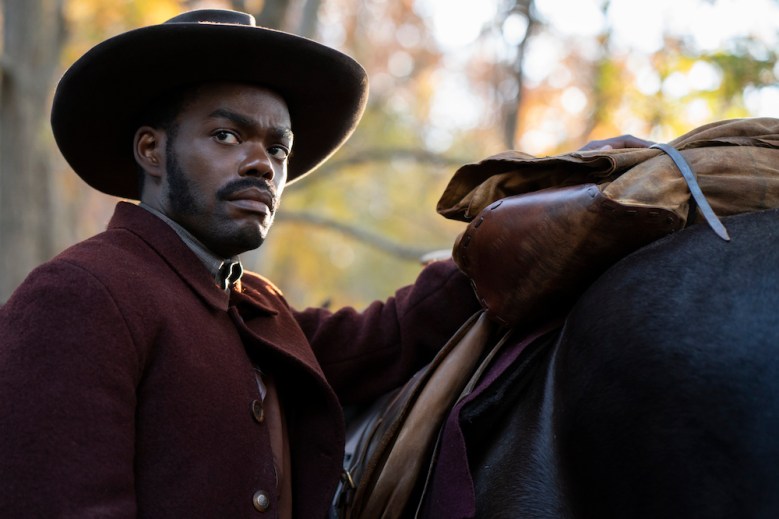 One of the great delights of watching Amazon Studios’ towering limited series “The Underground Railroad” is looking deep into a scene and seeing the layers of care and detail that have gone into building a wholly transformative experience.

Along those same lines, in the weeks since the project debuted on May 14, it has been a particular joy to listen to those involved with “The Underground Railroad” dig into how exactly Barry Jenkins’ adaptation of Colson Whitehead’s Pulitzer Prize-winning novel came into being, each person offering a small window into the series’ soul.

The same was true when William Jackson Harper recently took time to sit down with the crew from IndieWire’s TV podcast “Millions of Screens” to discuss his work as Royal, a free-born Black man who works as an operator with the underground railroad and cultivates great affection for the story’s heroine, Cora (Thuso Mbedu).

A far cry from Harper’s breakout role as Chidi on NBC’s beloved comedy series “The Good Place,” the actor was more than willing to delve into his process preparing for a role that required him to stretch in new and different ways, offering scads of insight into bringing Royal to life. Though the entire interview with Harper can be found above, here are three tidbits worth savoring in their own right.

Embracing Fear and Not Coasting

“You know, I actually like when I feel a little bit out of my depth and a little bit unprepared. As I get older, I find that it’s easier for me to go on autopilot and do the thing that I do. The thing that was really fun about my earlier days as an actor was always feeling like I have no idea what’s going on. And then eventually getting to a place where you understand what’s happening.”

“I mean, this is a little glib, but sort of fake it till you make it. People are giving you notes and you’re just like, ‘Sure, sure, sure. Got it,’ and you have no idea how to play the note that they’re giving you. For me, it just makes me feel young. It makes me feel like I have a lot to learn — which I mean, I know I do — but it’s really easy to just stay in one pathway, especially the one that’s least resistant and just glide along.”

“So when something comes along that is challenging that I do feel like I’m not prepared to do at the time that I’m about to start it, that’s when I get a little jolt of energy because I’m like, ‘OK, here we go. This is what it felt like when I was starting out.’ And I was just excited to be doing this. It was all brand new. I think that’s the thing about the challenging parts is that they’re brand new. I mean, everything is to a degree, but, the really challenging stuff, it’s the fact that you could fail that’s the thrill of it, you know?”

Thuso Mbedu and William Jackson Harper in “The Underground Railroad”

And Then Barry Jenkins Tells You to Ad-Lib

“But yeah, I had no idea that he would sort of be like, ‘Yeah, just mix it up. Try something a little different here,’ and then like, he would feed us some lines here and there to tweak and change And we would do that. But there were definitely some times I was caught off guard with a, ‘Just improvise here’ and I was like, ‘Oh! You’re trusting me with that? Because you’ve done your work. And I’m sort of just seeing what I can come up with.’ I don’t want to undermine the beauty of this script by putting something that doesn’t fit and doesn’t work. It was just so good that there’s no way that I can improve it with what I’m coming up with in the moment.”

And Sometimes the Ad-Lib Works

“I found that when I read stuff from, you know, that time period, there’s a formality to it… when I would read quotes, there’s a way in which people put their sentences together that was just a little bit different and actually used a few more words and it was a little less efficient. And so that was helpful.”

“So there was a couple of moments where there was an ad lib at the end of the scene, where after the party, Cora and I are talking about moving off the farm and Rumsey Brooks has that poem, and we’re having our conversation out to the side. We got to that scene and Barry threw us a couple of lines and in the book, they talk about Royal being sort of an exotic figure in certain ways. And I thought, ‘OK, so this is a guy that I wonder if he’s a dude who’s read some Shakespeare?’ So at the end of the scene [Barry] said why don’t you say something like, ‘Why are you looking at me like that?'”

“And then we kick back into the whole thing where Cora says, ‘You know, you real pretty when you smile like that’ and throws it back at me. And I was like, ‘It would be fun, just because Royal is sort of this weird, exotic character, what if he pulled out some sort of Shakespearean sounding text?’ and so that’s where, ‘You gaze upon me most strangely Miss Cora’ came from. I was like, he would probably have access to that a little more readily than someone now. People read things and had access to poetry and passages from books at the top of the dome and so I was just like, ‘Let me try that.’ And then it made it in, which I was like, ‘Fantastic!'”

For the rest of our interview with Harper, tune in to this week’s episode of IndieWire’s TV podcast “Millions of Screens” with Deputy TV Editor Ben Travers, Creative Producer Leo Garcia, and TV Awards Editor Libby Hill. Then, stick around for Libby and Ben’s pleas for the limited series and drama series Emmy nominations, as the voting window enters its final hours.