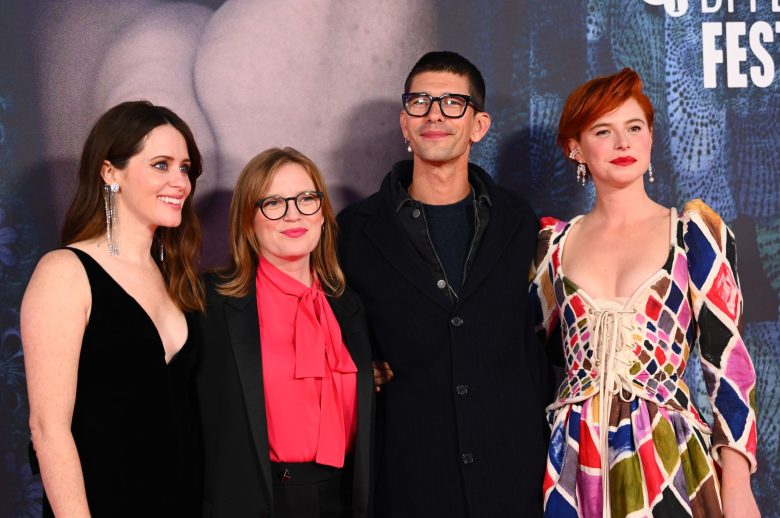 Ben Whishaw wasn’t just the odd man out on “Women Talking.” He was the only one.

Writer-director Sarah Polley’s absorbing look at several Mennonite women finds them talking through their plans after realizing they’ve all been drugged and raped by the men in their community. As August, the kind schoolteacher who sits with the women in the barn where most of the movie takes place, Whishaw plays the sole male character, while more terrible ones lurk just outside the frame.

“It’s rare to be around that many women who are intimate with one another in that way, and vulnerable in that way,” Whishaw said, joining co-star Claire Foy in a conversation for IndieWire’s Awards Season Spotlight video series. “I definitely had a sense that I liked this quite a lot more than I like being in a group of only men. If I had to choose between the two I’d rather be with women.”

“The Crown” star is one of the several actresses in the movie — alongside Rooney Mara, Jessie Buckley, and Judith Ivey, among others — who play commanding women keen on taking back control of their situation. As they debate their options (stay and fight, do nothing, or leave), “Women Talking” centers on the precise, authentic chemistry shared by its cast, a feat that didn’t seem altogether feasible when rehearsal began over Zoom due to COVID restrictions last year.

“It was a weird way to start a job,” said Foy, whose idea to have the cast visit a Mennonite market for preparation got nixed due to pandemic protocols. “As actors, your instinct is to get as close to people as humanly possible, and we weren’t able to do that. It was quite scary, actually; it was quite isolating.”

Yet the pair said that once production took off, they were relieved to find that they worked in harmony together. “There were no big egos pulling attention away from why we were there,” he said. “That’s unusual.” Foy agreed. “I have thought about what it would’ve been like if there had been someone who had really been like shouting at the crew,” she said. “We mainly had collective breakdowns about snacks and how hot it was. We were like one organism when it came to doing the work. We moved together as a pack.”

She added that the comfort on the set snuck into the final product, with Polley often including small details from their behavior that weren’t in the script. “There are moments when you see people as they are,” Foy said. “There’s genuine charisma, genuine chemistry between people. There’s plenty of Jessie Buckley’s eyerolls. I recognize the person. It’s beautiful to see that Sarah was watching the whole time and during the edit realized it was important to see someone’s genuine personality.”

Whishaw echoed the sentiment. “That was the feeling of being there,” he said. “Sarah was at pains to create an atmosphere where that would be the outcome, that degree of relaxation and ease and just willingness to be vulnerable.”

That came in handy due to the heaviness of the subject matter. While much of the cast brought plenty of their prior experiences to the table, they were working alongside some less novices who had to grasp the emotional toll of the material as the project took shape.

Whishaw recalled an early rehearsal when newcomer Kate Hallett, who plays one of the younger women in the colony, got upset. “Kate hadn’t built that armor in that sense,” he said. “She was very porous to the material in a way that not everyone was but I could feel like everyone was silently processing it. I remember her naked reaction to what we were doing was quite startling and a reminder that this is incredibly painful, real stuff we were talking about.”

Foy said that she tried to warn her younger co-stars about the tough nature of the material before realizing it was futile. “It’s sort of pointless having that conversation because it takes you years to figure out how to survive in the world that we work in without sacrificing too much of yourself,” she said. “What I loved about that pure, honest, overwhelmed reaction was — oh my god, as an actor, you do want to create a barrier between yourself and the work, especially with material like this, but how beautiful when it’s not there.”