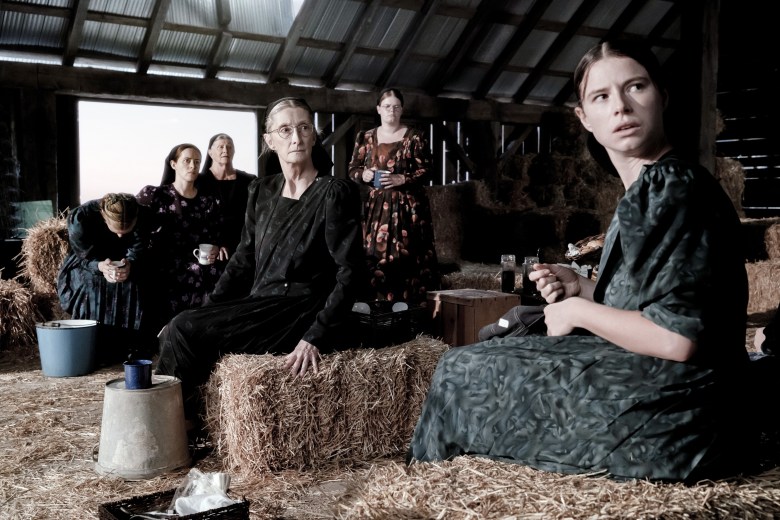 “Women Talking” is a film that’s true to its title; the women do a lot of talking as they debate how to respond to the sexual abuse committed by the men of their Mennonite colony. Sarah Polley’s drama sees the woman address multiple solutions for addressing the crisis, including staying and forgiving the men, fighting for their rights in the colony, or leaving the colony forever.

In this exclusive clip, Ona (played by Rooney Mara) brings up the idea of asking the men to leave, receiving an incredulous response from the other women. Along with Mara, the cast of “Women Talking” includes Claire Foy, Jessie Buckley, and Judith Ivey as the woman in the debate, while Frances McDormand produced the film and has a small role. Ben Whishaw also stars in the film, as the sole man in the meeting, taking minutes for the women.

Adapted from the 2018 novel by Miriam Toews, “Women Talking” is inspired by a real sexual abuse trial in Bolivia where seven men from the Mennonite Manitoba Colony were accused of raping 130 women. These crimes, which occurred between 2005 and 2009, were committed by drugging the women with animal anesthetic in their homes. Over 100 women testified in the 2011 trial, which ended with the men receiving a 25-year prison sentence.

Since its premiere at the Telluride Film Festival this September, “Woman Talking” has received critical acclaim, with praise for its script and ensemble. Both the National Board of Review and the American Film Institute named the film one of the 10 best of the year. In his review out of the festival, IndieWire chief film critic David Ehrlich wrote that “Toews’ book could easily have been made into a play, but every widescreen frame of Polley’s film will make you glad that it wasn’t. She infuses this truth-inspired tale with a gripping multi-generational sweep from the very first line, which puts the violence in the rear-view mirror and begins the hard work of keeping it there.”

“Woman Talking” is now playing in select theaters. The film will expand January 6, before a wide release January 20. Watch the exclusive clip above.

This Article is related to: Film and tagged Sarah Polley, Women Talking